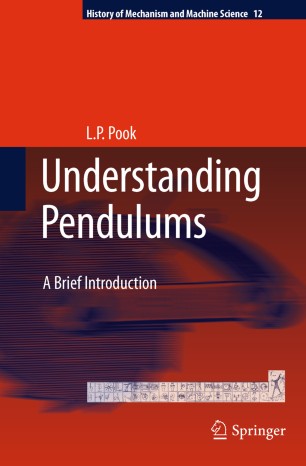 Part of the History of Mechanism and Machine Science book series (HMMS, volume 12)

Despite their apparent simplicity, the behaviour of pendulums can be remarkably complicated. Historically, pendulums for specific purposes have been developed using a combination of simplified theory and trial and error. There do not appear to be any introductory books on pendulums, written at an intermediate level, and covering a wide range of topics. This book aims to fill the gap. It is written for readers with some background in elementary geometry, algebra, trigonometry and calculus. Historical information, where available and useful for the understanding of various types of pendulum and their applications, is included.

Perhaps the best known use of pendulums is as the basis of clocks in which a pendulum controls the rate at which the clock runs. Interest in theoretical and practical aspects of pendulums, as applied to clocks, goes back more than four centuries. The concept of simple pendulums, which are idealised versions of real pendulums is introduced. The application of pendulums to clocks is described, with detailed discussion of the effect of inevitable differences between real pendulums and simple pendulums. In a clock, the objective is to ensure that the pendulum controls the timekeeping. However, pendulums are sometimes driven, and how this affects their behaviour is described. Pendulums are sometimes used for occult purposes. It is possible to explain some apparently occult results by using modern pendulum theory. For example, why a ring suspended inside a wine glass, by a thread from a finger, eventually strikes the glass. Pendulums have a wide range of uses in scientific instruments, engineering, and entertainment. Some examples are given as case studies.