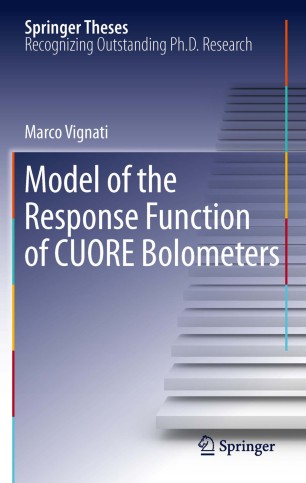 Model of the Response Function of CUORE Bolometers

The neutrino is probably the most elusive elementary particle discovered so far. Its mass is very small and still unknown, and it is considered a key quantity in many theories beyond the Standard Model of particle physics. The smallness of the mass could be explained if neutrinos are, unlike all other particles, equal to their own antiparticles, thus following the conjecture of E. Majorana.

The double beta decay without emission of neutrinos is a nuclear process that can happen only if the neutrino is a Majorana particle. Observation of this decay would therefore necessarily imply that neutrinos are Majorana particles and would set the mass scale, a breakthrough in our understanding of nature.

The CUORE experiment will search for the neutrinoless double beta decay in 130Te, using 1 ton of TeO2 bolometric detectors. Bolometers are calorimeters that operate at cryogenic temperatures, able to measure the temperature rise produced by the energy release of an impinging particle. They feature good resolution and low background, making them excellent detectors to search for rare decays.

The performances of the experiment are currently limited by temperature instabilities of the bolometers and by a poor understanding of their data. Mea­suring the energy deposited by a particle, in fact, is complicated and the shape of the signal depends on the energy.

In this thesis a model of the signal of TeO2 bolometers is developed. It is able to explain the origin of the unwanted features that would limit the performances of CUORE. The application of the model to data from test bolometers led to great improvements of the results in terms of energy resolution, energy calibration, and signal shape discrimination.

This thesis has been awarded at the Department of Physics, Universita di Roma - La Sapienza, Italy.
With a Foreword by Professor Fernando Ferroni.