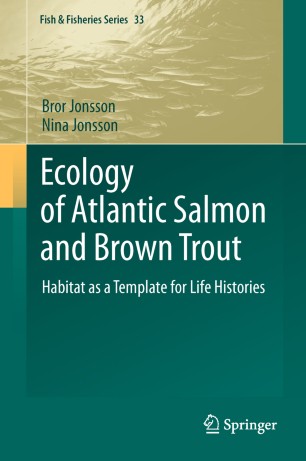 Habitat as a template for life histories

Destruction of habitat is the major cause for loss of biodiversity including variation in life history and habitat ecology. Each species and population adapts to its environment, adaptations visible in morphology, ecology, behaviour, physiology and genetics. Here, the authors present the population ecology of Atlantic salmon and brown trout and how it is influenced by the environment in terms of growth, migration, spawning and recruitment. Salmonids appeared as freshwater fish some 50 million years ago. Atlantic salmon and brown trout evolved in the Atlantic basin, Atlantic salmon in North America and Europe, brown trout in Europe, Northern Africa and Western Asia. The species live in small streams as well as large rivers, lakes, estuaries, coastal seas and oceans, with brown trout better adapted to small streams and less well adapted to feeding in the ocean than Atlantic salmon. Smolt and adult sizes and longevity are constrained by habitat conditions of populations spawning in small streams. Feeding, wintering and spawning opportunities influence migratory versus resident lifestyles, while the growth rate influences egg size and number, age at maturity, reproductive success and longevity. Further, early experiences influence later performance. For instance, juvenile behaviour influences adult homing, competition for spawning habitat, partner finding and predator avoidance.


The abundance of wild Atlantic salmon populations has declined in recent years; climate change and escaped farmed salmon are major threats. The climate influences through changes in temperature and flow, while escaped farmed salmon do so through ecological competition, interbreeding and the spreading of contagious diseases. The authors pinpoint essential problems and offer suggestions as to how they can be reduced. In this context, population enhancement, habitat restoration and management are also discussed. The text closes with a presentation of what the authors view as major scientific challenges in ecological research on these species.