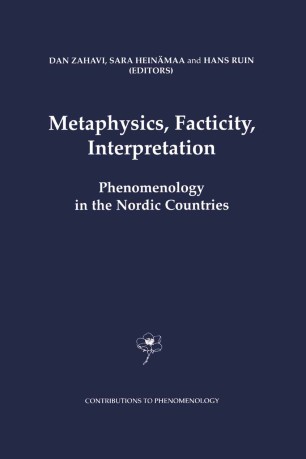 Phenomenology in the Nordic Countries

Part of the Contributions to Phenomenology book series (CTPH, volume 49)

The past decade has witnessed a notable turn in philosophical orientation in the Nordic countries. For the first time, the North has a generation of philosophers who are oriented to phenomenology. This means a vital rediscovery of the phenomenological tradition as a partly hidden conceptual and methodological resource for taking on contemporary philosophical problems.
The essays collected in the present volume introduce the reader to the phenomenological work done in the Nordic countries today. The material is organized under three general headings: metaphysics, facticity, and interpretation.
The first part, "Metaphysics", asks if phenomenology is, or could be taken as, a metaphysical inquiry. It studies this possibility in a systematic as well as in a historical perspective. The second part, "Facticity", focuses on the double character of the philosophizing subject, on the one hand, as a worldly being bound by a cultural and historical situation, and on the other hand, as the one who thinks this condition and gives it an interpretation. It studies four aspects of facticity in particular: language, dwelling, alterity, and generation. The third part, "Interpretation", clarifies the different notions of interpretation central to phenomenology, understood as hermeneutics.