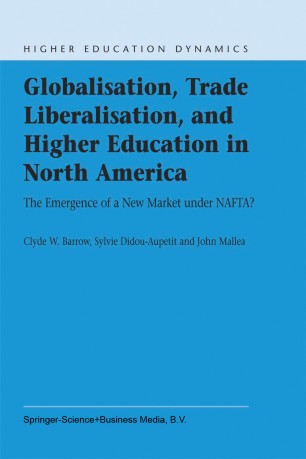 The Emergence of a New Market under NAFTA?

Since the mid-1970s, economic and educational developments in Canada, Mexico, and the USA have been influenced by two parallel trends: (1) the resurgence of glob­ al economic competition and (2) the active promotion of knowledge-intensive, serv­ ice based economies. Both trends have been reinforced by the liberalisation of inter­ national trade under the rubric of the General Agreement on Tariffs and Trade (GATT) and the World Trade Organisation (WTO). The North American Free Trade Agreement (NAFTA) has accelerated these trends in all three countries by providing the framework for an integrated regional economy in North America designed to compete against comparable trading blocs centred in Japan and the European Union. The purpose of this study is to examine the developing relationship between trade liberalisation, post-industrialisation, and higher education in Canada, Mexico, and the USA. The larger trends and linkages that we identitY are by no means confined to these three countries. We have chosen to focus on Canada, Mexico, and the USA, because the adoption of the North American Free Trade Agreement has accelerated the devel­ opment of economic policies in these countries, which identitY higher education as a central component of each country's new competitiveness strategy. As a conse­ quence, government policy-makers and higher education decision-makers are responding with targeted initiatives to promote the internationalisation of higher education generally and to promote trilateral co-operation among North American higher education institutions specifically.