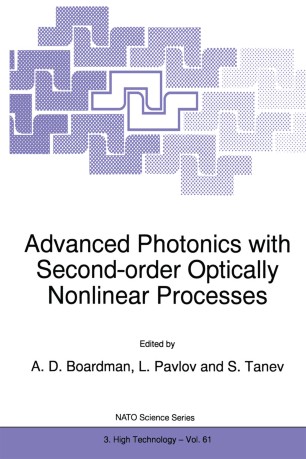 Although it took some time to establish the word, photonics is both widely accepted and used throughout the world and a major area of activity concerns nonlinear materials. In these the nonlinearity mainly arises from second-order or third-order nonlinear optical processes. A restriction is that second-order processes only occur in media that do not possess a centre of symmetry. Optical fibres, on the other hand, being made of silica glass, created by fusing SiO molecules, are made of material with a centre of z symmetry, so the bulk of all processes are governed by third-order nonlinearity. Indeed, optical fibre nonlinearities have been extensively studied for the last thirty years and can be truly hailed as a success story of nonlinear optics. In fact, the fabrication ofsuch fibres, and the exploitation oftheir nonlinearity, is in an advanced stage - not least being their capacity to sustain envelope solitons. What then ofsecond-order nonlinearity? This is also well-known for its connection to second-harmonic generation. It is an immediate concern, however, to understand how waves can mix and conserve both energy and momentum ofthe photons involved. The problem is that the wave vectors cannot be made to match without a great deal of effort, or at least some clever arrangement has to be made - a special geometry, or crystal arrangement. The whole business is called phase­ matching and an inspection ofthe state-of-the-art today, reveals the subject to be in an advanced state.