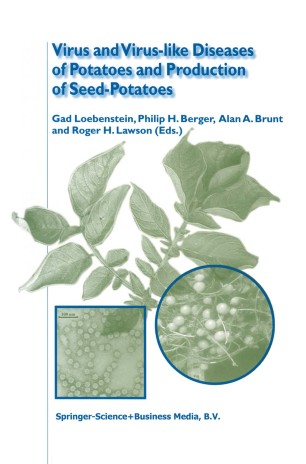 Potatoes, a major vegetatively-propagated crop, has been closely linked with plant virus research during the last 8 decades because, without their effective control potato viruses can cause considerable losses of crop quality and yield. Such research has resulted in marked advances in diagnosis, from relatively simple biological and serological tests to electron microscopy, sophisticated serological procedures and, more recently, the use of polymerase chain reaction (PCR) and nucleic acid hybridization methods. Associated tissue culture research during the past forty years or so has resulted in the successful production of virus-free plants from potato cultivars that were totally infected. Nevertheless, in many countries the high incidence of virus infection still causes considerable yield losses. Because of their importance, potato viruses have also long been important subjects for research; much is thus now known about their intrinsic biological and physico-chemical properties, genomes, gene functions, virus-vector relationships (including specific sites of interaction between viral coat protein and the vector) and their potential as vehicles for transformation.