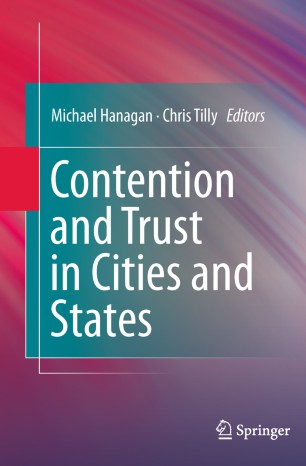 Contention and Trust in Cities and States

Cities and nation-states have co-existed uneasily throughout human history. At times fused, at other times opposed, at still other times hierarchically linked, they have been crucibles of identity and social and political action. Today’s globalization re-elevates the importance of cities, but contrary to what is often claimed, also sustains the importance of nation-states in transformed ways. Contention and Trust in Cities and States explores cities and nation-states throughout history and around the world, bringing together the research of top scholars. It takes as a jumping-off point the work of the late Charles Tilly, but proceeds varied topics ranging from how today’s drug cartels undermine nation-states to how cities, nation-states, and empires treated religious minorities in the middle of the last millennium. Threaded throughout are themes of city-state relations, trust networks and commitment, democracy and inequality, and the importance of historical legacies in shaping state structures, practices, and capacities. Political scientists, sociologists, geographers, urbanists, historians and others concerned with how power and trust play out in cities and nation-states will find this a provocative and valuable collection.

Michael Hanagan is Adjunct Professor of History at Vassar College.  He has taught at Vanderbilt University, Columbia University and the New School for Social Research.  His books include: The Logic of Solidarity: Artisans and Industrial Workers in Three French Towns (1980), Nascent Proletarians: Class Formation in Post-Revolutionary France, 18400-1880 (1989), Confrontation, Class Consciousness and the Labor  Process (1986), Proletarians and Protest: Studies in Class Formation (1986), Expanding Rights, Reconfiguring States (2000),  and Challenging Authority: The Historical Study of  Contentious Politics. (1999). Global Connections: Politics, Exchange, and Social Life: A World History, (forthcoming),  He  is currently completing (with Miriam Cohen) a manuscript on the rise of the welfare state in England, France, and the U.S., 1870-1950.

Chris Tilly is Professor of Urban Planning at UCLA and Director of the UCLA Institute for Research on Labor and Employment. His research focuses on the determinants of job quality, particularly in lower-level jobs, as well as social movements and urban and regional development.  His books include Half a Job: Bad and Good Part-Time-Jobs in a Changing Labor Market (1996), Work Under Capitalism (1998), Stories Employers Tell: Race, Skill, and Hiring in America (2001), Urban Inequality: Evidence from Four Cities (2001), and The Gloves-Off Economy: Labor Standards at the Bottom of America’s Labor Market (2008).  Tilly’s most recent work is comparative, building on field research on retail jobs in the United States and Mexico and collaboration with researchers in a number of European countries.