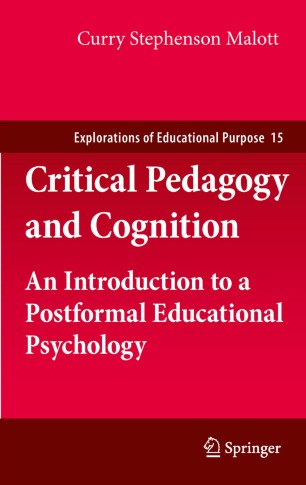 An Introduction to a Postformal Educational Psychology

This book simultaneously contributes to the fields of critical pedagogy and educational psychology in new and innovative ways by demonstrating how critical pedagogy, postformal psychology, and Enlightenment science, seemingly separate and distinct disciplines, are actually part of the same larger, contextualized, complex whole from the inner most developmentally-fixed biological context of human faculties to the perpetually shifting, socially and politically constructed context of individual schema and human civilization.

The text’s uniqueness stems from its bold attempt to connect the postformal critical constructivist/pedagogy work of Joe Kincheloe and others to Western science through a shared, although previously misunderstood, critique and rejection of crude forms of social control, which the psychologists call behaviorism and Western scientists identify as mechanical philosophy. This book therefore argues that critical pedagogy— which includes, among others, anarchist, Marxist, feminist, Indigenous (globally conceived), Afro-Caribbean/American, and postmodern traditions—and critical/constructivist educational psychology have much to gain by engaging previously rejected work in critical solidarity, that is, without compromising one’s values or democratic commitments. The goal of this book is therefore to contribute to this vision of developing a more transgressive and transformational educational psychology.