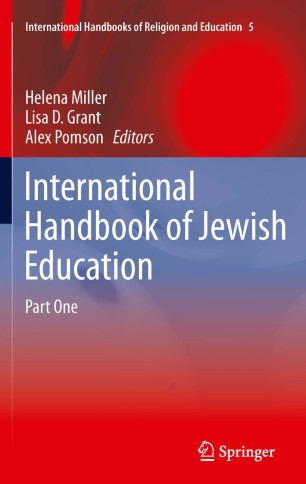 Part of the International Handbooks of Religion and Education book series (IHRE, volume 5)

The Handbook is divided broadly into four main sections:

This comprehensive collection of articles providing high quality content, constitutes a difinitive statement  on the state of Jewish Education world wide, as well as through a wide variety of lenses and contexts. It is written in a style that is accessible to a global community of academics and professionals.

Helena Miller is the Director of Research and Evaluation at the UJIA, London. She has a PhD in Jewish Education from London University, and has taught in schools and higher education for many years. Previously, she was the Director of Education at Leo Baeck College, London. She oversees the inspection of Jewish schools in the UK.  Publications include “Changing the Landscape: Pluralist Jewish Education in the UK”, Tel Aviv University 2011, “Supplementary Jewish Education in the UK: Facts and Issues of the Cheder System”, International Journal of Jewish Educational Research, February 2010, Accountability through Inspection: Monitoring and Evaluating Jewish Schools London: Board of Deputies of British Jews and Meeting the Challenge: the Jewish Schooling Phenomenon in the UK, The Oxford Review of Education, December 2001, as well as books on teaching visual arts, Craft in Action (Stenor Books 1986) and The Magic Box (Torah Aura 1992). Helena is currently co-chair of Limmud International, on the Advisory Board of the Institute of Jewish Policy Research, and on the executive of the Network for Research in Jewish Education.

Lisa Grant is Associate Professor of Jewish Education at the Hebrew Union College – Jewish Institute of Religion, New York. Her research and teaching focus on adult Jewish learning, the professional development of rabbi-educators, and the place of Israel in American Jewish life.  She has published widely in a range of academic journals, books and teaching guides. She is lead author of A Journey of  Heart and Mind: Transformational Learning in Adulthood (JTS Press, 2004) with Diane Schuster, Meredith Woocher and Steven M Cohen, and author of Aytz Hayim Hi, a two year curriculum guide for Adult Bat Mitzvah (Women’s League of Conservative Judaism, 2001). Lisa is immediate past chair of the Network for Research in Jewish Education and serves on the executive committee of the Israel Association for Research in Jewish Education. She is currently working on a book on the teaching of Israel in North America.

Alex Pomson is a senior researcher at the Melton Centre for Jewish Education at the Hebrew University, Jerusalem. He trained in History at the university of Cambridge and received his PhD in Religious education from the University of London in 1994. He was founding head of Jewish Studies at King Solomon High School, London. From 1996-2004. He served as Associate professor of Jewish Teacher Education at York University, Toronto, where he co-ordinated York’s Jewish Teacher education Programme. He is past Chair of the Network for Research in Jewish Education. He completed a longitudinal study funded by the Social Sciences and Humanities Research Council of the Canadian Government, published in 2008, as a co-authored book, Back to School: Jewish day school in the lives of adult Jews. His most recent book, published by the Littman Library of Jewish Civilisation, is a co-edited volume, Jewish schools, Jewish communities: a reconsideration.