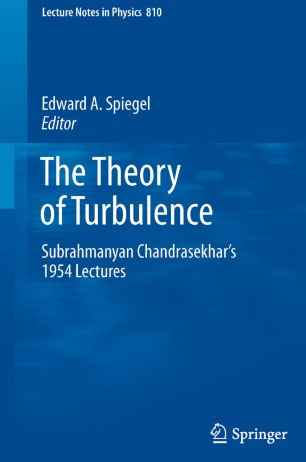 The Theory of Turbulence

In January 1937, Nobel laureate in Physics Subrahmanyan Chandrasekhar was recruited to the University of Chicago. He was to remain there for his entire career, becoming Morton D. Hull Distinguished Service Professor of Theoretical Astrophysics in 1952 and attaining emeritus status in 1985. This is where his then student Ed Spiegel met him during the summer of 1954, attended his lectures on turbulence and jotted down the notes in hand. His lectures had a twofold purpose: they not only provided a very elementary introduction to some aspects of the subject for novices, they also allowed Chandra to organize his thoughts in preparation to formulating his attack on the statistical problem of homogeneous turbulence. After each lecture Ed Spiegel transcribed the notes and filled in the details of the derivations that Chandrasekhar had not included, trying to preserve the spirit of his presentation and even adding some of his side remarks. The lectures were rather impromptu and the notes as presented here are as they were set down originally in 1954. Now they are being made generally available for Chandrasekhar’s centennial.