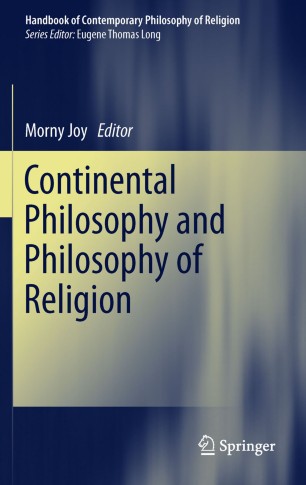 Part of the Handbook of Contemporary Philosophy of Religion book series (HCPR, volume 4)

This book is a survey of the work of twentieth-century Continental philosophy and its potential impact on philosophy of religion as it is has been practiced predominantly in English-speaking countries. Major French thinkers such as Ricoeur, Levinas, Derrida, Foucault and Marion are included, as well as Luce Irigaray and Julia Kristeva. The influence of the Frankfurt school of critical theory, exemplified today by Jürgen Habermas, is also acknowledged.

In the English-speaking domain, philosophy of religion has been principally identified with analytic philosophy, where the universal presumptions of an abstract reason, especially with reference to matters of belief and its justification, have dominated. In this tradition, truth pertains to an objective frame of reference, which is based both on logical arguments and modes of verification.

In contrast, Continental philosophy does not demarcate a specific area or subject matter that is designated as belonging to philosophy of religion. The boundaries between disciplines and their ideas are much more fluid. As a result, questions regarding religion can be located with reference to specific themes within a worldview that allows for a wide range of influences. In Continental philosophy also there is a greater appreciation of historical and cultural influences on the formation of philosophy's structures and procedures. At the same time, there is a move to greater self-reflexivity and a growing awareness of the need to formulate a distinct ethics of intersubjectivity that seeks justice. The terms of reference have indubitably been changed.

Fascinating developments are today occurring as contemporary Continental philosophers explore new possibilities for formulating and responding to traditional philosophical problems in relation to religion from this more expansive perspective.