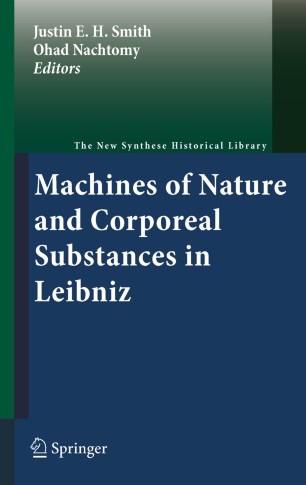 Machines of Nature and Corporeal Substances in Leibniz

In recent decades, there has been much scholarly controversy as to the basic ontological commitments of the philosopher Gottfried Wilhelm Leibniz (1646-1716). The old picture of his thought as strictly idealistic, or committed to the ultimate reduction of bodies to the activity of mind, has come under attack, but Leibniz's precise conceptualization of bodies, and the role they play in his system as a whole, is still the subject of much controversy. One thing that has become clear is that in order to understand the nature of body in Leibniz, and the role body plays in his philosophy, it is crucial to pay attention to the related concepts of organism and of corporeal substance, the former being Leibniz's account of the structure of living bodies (which turn out, for him, to be the only sort of bodies there are), and the latter being an inheritance from the Aristotelian hylomorphic tradition which Leibniz appropriates for his own ends. This volume brings together papers from many of the leading scholars of Leibniz's thought, all of which deal with the cluster of questions surrounding Leibniz's philosophy of body.