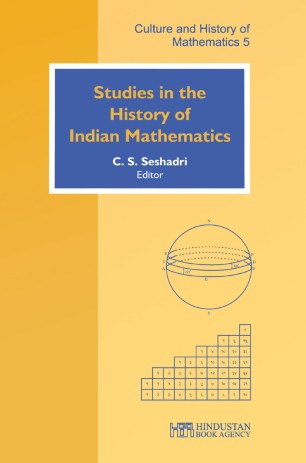 Studies in the History of Indian Mathematics

Part of the Culture and History of Mathematics book series (CHMATH)

This volume is the outcome of a seminar on the history of mathematics held at the Chennai Mathematical Institute during January-February 2008 and contains articles based on the talks of distinguished scholars both from the West and from India. The topics covered include: (1) geometry in the oulvasatras; (2) the origins of zero (which can be traced to ideas of lopa in Paoini's grammar); (3) combinatorial methods in Indian music (which were developed in the context of prosody and subsequently applied to the study of tonal and rhythmic patterns in music); (4) a cross-cultural view of the development of negative numbers (from Brahmagupta (c. 628 CE) to John Wallis (1685 CE); (5) Kunnaka, Bhavana and Cakravala (the techniques developed by Indian mathematicians for the solution of indeterminate equations); (6) the development of calculus in India (covering the millennium-long history of discoveries culminating in the work of the Kerala school giving a complete analysis of the basic calculus of polynomial and trigonometrical functions); (7) recursive methods in Indian mathematics (going back to Paoini's grammar and culminating in the recursive proofs found in the Malayalam text Yuktibhaua (1530 CE)); and (8) planetary and lunar models developed by the Kerala School of Astronomy. The articles in this volume cover a substantial portion of the history of Indian mathematics and astronomy. This book will serve the dual purpose of bringing to the international community a better perspective of the mathematical heritage of India and conveying the message that much work remains to be done, namely the study of many unexplored manuscripts still available in libraries in India and abroad.