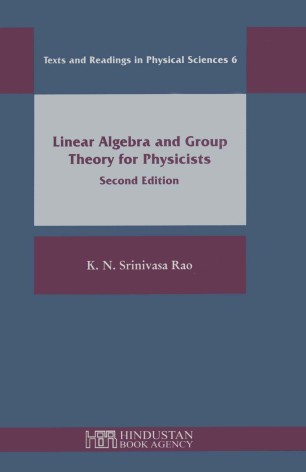 Part of the Texts and Readings in Physical Sciences book series

Professor Srinivasa Rao's text on Linear Algebra and Group Theory is directed to undergraduate and graduate students who wish to acquire a solid theoretical foundation in these mathematical topics which find extensive use in physics. Based on courses delivered during Professor Srinivasa Rao's long career at the University of Mysore, this text is remarkable for its clear exposition of the subject. Advanced students will find a range of topics such as the Representation theory of Linear Associative Algebras, a complete analysis of Dirac and Kemmer algebras, Representations of the Symmetric group via Young Tableaux, a systematic derivation of the Crystallographic point groups, a comprehensive and unified discussion of the Rotation and Lorentz groups and their representations, and an introduction to Dynkin diagrams in the classification of Lie groups. In addition, the first few chapters on Elementary Group Theory and Vector Spaces also provide useful instructional material even at an introductory level. An authority on diverse aspects of mathematical physics, Professor K N Srinivasa Rao taught at the University of Mysore until 1982 and was subsequently at the Indian Institute of Science, Bangalore. He has authored a number of texts, among them being ""The Rotation and Lorentz Groups and their Representations for Physicists"" (Wiley, 1988) and ""Classical Mechanics"" (Universities Press, 2003). The first edition of ""Linear Algebra and Group Theory for Physicists"" was co-published in 1996 by New Age International, and Wiley, New York.