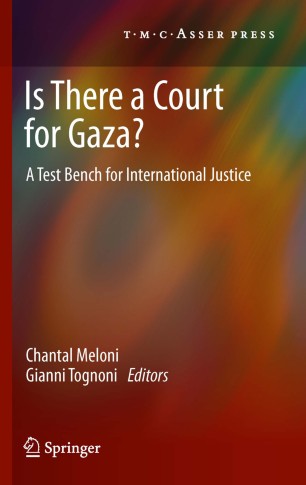 Is There a Court for Gaza?

A Test Bench for International Justice

“This volume asks: ‘Is There a Court for Gaza?’ The answer is a resounding yes. Indeed, there are at least two courts capable of addressing the armed conflict in Gaza that took place in December 2008 and January 2009: the International Court of Justice and the International Criminal Court. But neither of them has jurisdiction prima facie. The challenge, then, is to resolve the difficulties in establishing jurisdiction. Once this is done, the merits, which have only partially been addressed in the Goldstone Report, can be litigated. Even then, there are limits to the subject-matter jurisdiction that are likely to confine the judicial debate.”

The Israeli attack on Gaza of 27 December 2008 – 18 January 2009 (so-called ‘Operation Cast Lead’). started a critical debate at the international level on the alleged war crimes and possible crimes against humanity committed during and before the operation. In September 2009, the UN Fact Finding Mission on the Gaza Conflict presented its results in what became known as the ‘Goldstone Report’. The UN General Assembly and the Human Rights Council, amidst high political pressure, endorsed the Report’s recommendations, calling for prompt and adequate investigations by both sides to ensure accountability and justice for the victims of the conflict. In case of lack of proper domestic investigations and prosecutions, it was recommended to activate international justice mechanisms. The Prosecutor of the International Criminal Court opened a preliminary examination of the situation, but difficulties arose because of the uncertain status of the occupied Palestinian territory. The issue of the recognition of a State of Palestine is of extreme actuality and is currently under examination before the UN in New York (after President Abbas’ UN bid for recognition, of September 2011).

Dr. Gianni Tognoni, medical doctor, is Secretary-General to the Permanent Peoples' Tribunal, residing in the Lelio Basso Foundation, Rome, Italy. In his position, he is coordinating many research-projects in epidemiology, public health and human rights.