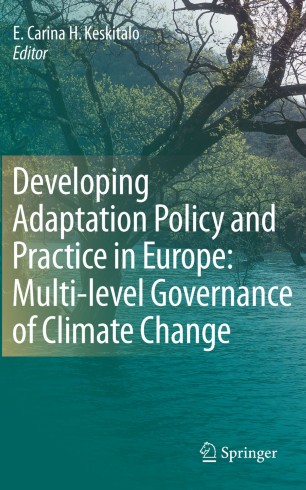 Mitigation is necessary, but will not be sufficient for us to avoid climate change – given existing emission levels, we will also need to adapt to the consequences of climate change. “Developing Adaptation Policy and Practice in Europe: Multi-level Governance of Climate Change” targets the development of adaptation policy in European countries with different relations between central, regional and local government, asking how adaptation policy at different levels has emerged.

Proceeding from a multi-level governance perspective, the book includes a theoretical framework on adaptation. Chapters describe the EU context for adaptation, the UK, Finnish, Swedish and Italian multi-level cases of adaptation in relation to water, and a survey of adaptation in additional industrialised EU and non-EU countries (among which Austria, France, Germany, Greece, Hungary, the Netherlands, Norway, Spain, Canada and Australia). The book concludes by discussing the development of adaptation policy in the cases. It also shows that the different paths for adaptation policy chosen in different cases can be related to administrative culture including centrality of government and the role of local and regional actors including networks.