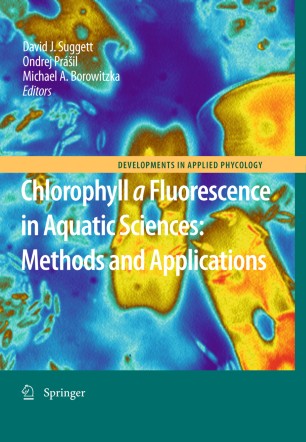 Chlorophyll a Fluorescence in Aquatic Sciences: Methods and Applications

Measurements of variable chlorophyll fluorescence have revolutionised global research of photosynthetic bacteria, algae and plants and in turn assessment of the status of aquatic ecosystems, a success that has partly been facilitated by the widespread commercialisation of a suite of chlorophyll fluorometers designed for almost every application in lakes, rivers and oceans. Numerous publications have been produced as researchers and assessors have simultaneously sought to optimise protocols and practices for key organisms or water bodies; however, such parallel efforts have led to difficulties in reconciling processes and patterns across the aquatic sciences. This book follows on from the first international conference on “chlorophyll fluorescence in the aquatic sciences” (AQUAFLUO 2007): to bridge the gaps between the concept, measurement and application of chlorophyll fluorescence through the synthesis and integration of current knowledge from leading researchers and assessors as well as instrument manufacturers.