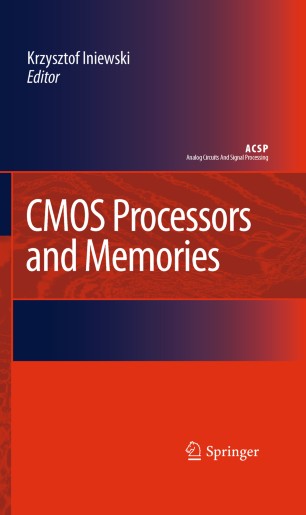 CMOS Processors and Memories addresses the-state-of-the-art in integrated circuit design in the context of emerging computing systems. New design opportunities in memories and processor are discussed. Emerging materials that can take system performance beyond standard CMOS, like carbon nanotubes, graphene, ferroelectrics and tunnel junctions are explored.

CMOS Processors and Memories is divided into two parts: processors and memories. In the first part we start with high performance, low power processor design, followed by a chapter on multi-core processing. They both represent state-of-the-art concepts in current computing industry. The third chapter deals with asynchronous design that still carries lots of promise for future computing needs. At the end we present a “hardware design space exploration” methodology for implementing and analyzing the hardware for the Bayesian inference framework. This particular methodology involves: analyzing the computational cost and exploring candidate hardware components, proposing various custom architectures using both traditional CMOS and hybrid nanotechnology CMOL. The first part concludes with hybrid CMOS-Nano architectures.

CMOS Processors and Memories is a must for anyone serious about circuit design for future computing technologies. The book is written by top notch international experts in industry and academia. It can be used in graduate course curriculum.

Krzysztof (Kris) Iniewski is managing R&D at Redlen Technologies Inc., a start-up company in British Columbia. His research interests are in VLSI circuits for medical and security applications. He is also an executive director of CMOS Emerging Technologies (www.cmoset.com). From 2004 to 2006 he was an Associate Professor at the Electrical Engineering and Computer Engineering Department of University of Alberta where he conducted research on low power wireless circuits and systems. During his tenure in Edmonton he put together a book for CRC Press "Wireless Technologies: Circuits, Systems and Devices". From 1995 to 2003, he was with PMC-Sierra and held various senior technical and management positions. Prior to joining PMC-Sierra, from 1990 to 1994 he was an Assistant Professor at the University of Toronto’s Electrical Engineering and Computer Engineering. Dr. Iniewski has published over 100 research papers in international journals and conferences. He holds 18 international patents granted in USA, Canada, France, Germany, and Japan. He received his Ph.D. degree in electronics (honors) from the Warsaw University of Technology (Warsaw, Poland) in 1988. Together with Carl McCrosky and Dan Minoli he is an author of "Data Networks – VLSI and Optical Fibre", Wiley, 2008. He recently edited "Medical Imaging Electronics", Wiley 2009, "VLSI Circuits for Bio-medical applications", Artech House 2008, and "Circuits at Nanoscale: Communications, Imaging and Sensing", CRC Press 2008.