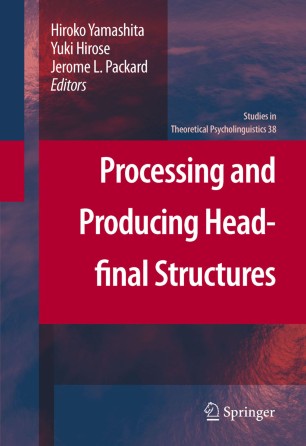 This book is the first collection of studies on an important yet under-investigated linguistic phenomenon, the processing and production of head-final syntactic structures. Until now, the remarkable progress made in the field of human sentence processing had been achieved largely by investigating head-initial languages such as English. The goal of the present volume is to deepen our understanding by examining head-final languages and offering a comparison of those results to findings from head-initial languages. This book brings together cross-linguistic investigations of languages with prominent head-final structures such as Basque, Chinese, German, Japanese, Korean, and Hindi. It will inform readers of linguistics with both theoretical and experimental backgrounds, as it provides accounts of previous studies, offers experimentally-based theoretical discussions, and includes experimental stimuli in the original languages.