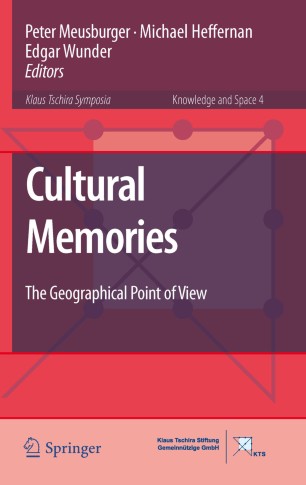 The Geographical Point of View

Part of the Knowledge and Space book series (KNAS, volume 4)

The revival of interest in collective cultural memories since the 1980s has been a genuinely global phenomenon. Cultural memories can be defined as the social constructions of the past that allow individuals and groups to orient themselves in time and space. The investigation of cultural memories has necessitated an interdisciplinary perspective, though geographical questions about the spaces, places, and landscapes of memory have acquired a special significance. The essays in this volume, written by leading anthropologists, geographers, historians, and psychologists, open a range of new interpretations of the formation and development of cultural memories from ancient times to the present day. The volume is divided into five interconnected sections. The first section outlines the theoretical considerations that have shaped recent debates about cultural memory. The second section provides detailed case studies of three key themes: the founding myths of the nation-state, the contestation of national collective memories during periods of civil war, and the oral traditions that move beyond national narrative. The third section examines the role of World War II as a pivotal episode in an emerging European cultural memory. The fourth section focuses on cultural memories in postcolonial contexts beyond Europe. The fifth and final section extends the study of cultural memory back into premodern tribal and nomadic societies.