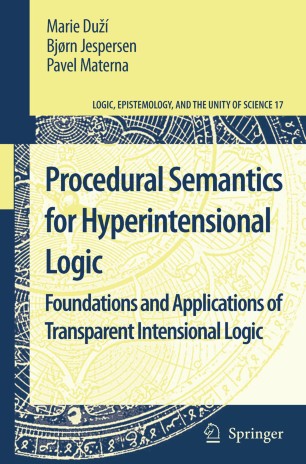 Part of the Logic, Epistemology, and the Unity of Science book series (LEUS, volume 17)

July 2011 -- The Council of the Academy of Sciences of the Czech Republic has presented Procedural Semantics for Hyperintensional Logic with its prestigious award for outstanding results of major scientific importance.


This volume sets out the foundations of Transparent Intensional Logic, together with many applications to a wide range of topics including formal semantics, philosophy of language, and philosophical logic. Special attention is devoted to some topics that generally tend to be dealt with only in passing. They include, inter alia, notional attitudes, knowing whether, concepts (understood rigorously and non-mentalistically),
attitudes de re, and anaphora in hyperintensional contexts.

The overall programme is set out and placed in historical and systematic context. The programme consists in devising one overarching semantic theory for all sorts of discourse, whether colloquial, scientific, mathematical or logical. The semantic theory is a procedural one, according to which sense is an abstract, pre-linguistic procedure detailing what operations to apply to what procedural constituents to arrive at the product (if any) of the procedure. Such procedures are rigorously defined as so-called constructions residing in a platonic realm. The semantics is tailored to the hardest case, as constituted by hyperintensional contexts, and generalized from there to intensional and extensional contexts.

This anti-contextualist and fully compositional semantics is, to the best of our knowledge, the only one that deals with all kinds of context in a unique and systematic manner. The three authors have striven to write an accessible study of Transparent Intensional Logic that may be read by researchers and advanced students of logic, semantics, linguistics, informatics, computer science, and kindred disciplines.

Doc. RNDr. Marie Duží, CSc., is Associate Professor at VSB-Technical University Ostrava, Czech Republic. Her research interests include philosophical and mathematical logic, conceptual modelling, computer science (theory of information). In 2001 she was one of the invited lecturers in a seminar on Transparent Intensional Logic, University of Leiden, the Netherlands. In 2008 the Rector of VSB-Technical University Ostrava awarded her for the greatest contribution to the scientific and research progress of the entire university.

Dr Bjørn Jespersen, PhD., is currently Visiting Researcher at the Section of Philosophy, Faculty of Technology, Policy and Management, Delft University of Technology. Since the late 1990s Jespersen published forty research papers, frequently co-authored with Marie Duží or Pavel Materna, on Transparent Intensional Logic, as well as covering other issues in natural-language semantics, epistemology, and epistemic logic. He co-edited, together with V. Svoboda and C. Cheyne, the 900-page collection of Tichý’s collected papers, published in 2004.

PhDr. Pavel Materna, CSc, is Professor of Logic at Masaryk University (Brno), and senior researcher at the Institute of Philosophy of the Czech Academy of Sciences (Prague). Materna is a member of the editorial board of the philosophical journals Filosofický casopis (Philosophical journal) and Organon F, member of the Internationale Bernard-Bolzano Gesellschaft, Salzburg, Austria, and Chairman of the National Committee for Logic, Methodology and Philosophy of Science.

“The text describes the origins and notations of a new symbolic system of variables and derives completed thoughts likely to be important to future research in Logic. The book is a welcome addition to any student’s logic library and or reading list at both graduate/undergraduate levels.” (Joseph J. Grenier, Amazon.com, November, 2013)
Buy options