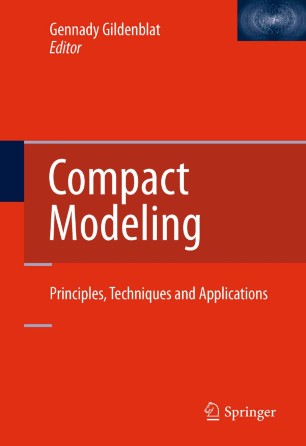 Compact Models of circuit elements are models that are sufficiently simple to be incorporated in circuit simulators and are sufficiently accurate to make the outcome of the simulators useful to circuit designers. The conflicting objectives of model simplicity and accuracy make the compact modeling field an exciting and challenging research area for device physicists, modeling engineers and circuit designers.

The models of MOS transistors underwent revolutionary change in the last few years and are now based on new principles. The recent models of diodes, passive elements, noise sources and bipolar transistors were developed along the more traditional lines. Following this evolutionary development they became highly sophisticated and much more capable to reflect the increased demands of the advanced integrated circuit technology. The latter depends on the compact models for the shortening of the design cycle and eliminating the elements of overdesign which is often undesirable in today’s competitive environment. At the same time, statistical modeling of semiconductor devices received new significance following the dramatic reduction of the device dimensions and of the power supply voltage. Finally, despite the complexity of the fabrication process, the multi-gate MOS transistors are now seriously considered for the purpose of controlling the small geometry effects.

Most of the recent texts on compact modeling are limited to a particular class of semiconductor devices and do not provide comprehensive coverage of the field. Having a single comprehensive reference for the compact models of most commonly used semiconductor devices (both active and passive) represents a significant advantage for the reader. Indeed, several kinds of semiconductor devices are routinely encountered in a single IC design or in a single modeling support group. Compact Modeling includes mostly the material that after several years of IC design applications has been found both theoretically sound and practically significant. Assigning the individual chapters to the groups responsible for the definitive work on the subject assures the highest possible degree of expertise on each of the covered models.

Compact Modeling also includes chapters on the MOSFET noise theory, benchmarking of MOSFET compact models, modeling of the power MOSFET, and an overview of the bipolar modeling field. It concludes with two chapters describing the variability modeling including some recent developments in the field.