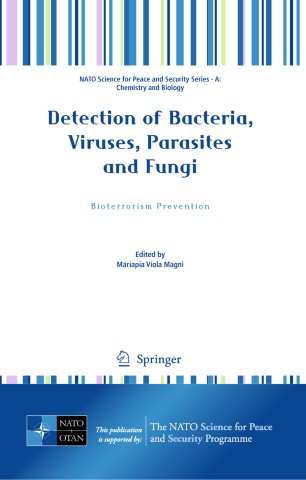 Part of the NATO Science for Peace and Security Series A: Chemistry and Biology book series (NAPSA)

This publication represents the result of the fruitful workshop organised with the aim to attract the attention on the possibility of bio terrorism attack, with the s- port of NATO funds. In the last years the attention was strongly concentrated on the terrorism view similar to “military type attacks:” bomb on the trains, kamikazes, airplanes etc. As consequence many devices studied are directed to prevent these attacks such as the control of the passengers before the flight. For the people terrorism is therefore equivalent to bomb or similar and nobody think that there is also other possible and sophisticated means that can be used by the terrorist. In 1995 Sarin gas in the Tokio subway killed 12 people and affected 5,000 persons. In the USA anthrax was sent by mail to many federal offices. These events and other cases attract the attention on these possible terrorist attacks and the first recommendations for preventing theses events were\elaborated in the United State and in Europe. The possible agents and the modality that can be used for the diffusion are analysed and food and water are considered the principal and more favourable way. The story and the principal decision about this were reported in the first article of this collection which introduces the concept of bio-terrorism.