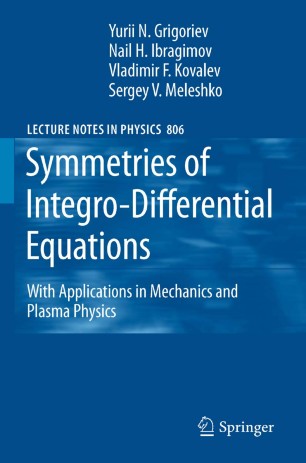 With Applications in Mechanics and Plasma Physics

This book aims to coherently present applications of group analysis to integro-differential equations in an accessible way. The book will be useful to both physicists and mathematicians interested in general methods to investigate nonlinear problems using symmetries.

Differential and integro-differential equations, especially nonlinear, present the most effective way for describing complex processes. Therefore, methods to obtain exact solutions of differential equations play an important role in physics, applied mathematics and mechanics. This book provides an easy to follow, but comprehensive, description of the application of group analysis to integro-differential equations. The book is primarily designed to present both fundamental theoretical and algorithmic aspects of these methods. It introduces new applications and extensions of the group analysis method. The authors have designed a flexible text for postgraduate courses spanning a variety of topics.

“The present book deals with a large number of topics concerning symmetries of integro-differential, stochastic and delay equations that are met in many fields, from fluid mechanics and plasma physics to biology and so on. … In conclusion, the book is rich in results and is of interest not only to physicists and applied scientists, but also to mathematicians working with (nonlinear) integrodifferential equations.” (Alfredo Lorenzi, Mathematical Reviews, Issue 2011 i)

“The reviewed collective monograph is very useful to both physicists and mathematicians interested in general methods for investigation of nonlinear problems using symmetries. It can also serve as a textbook on symmetries of I-DEs, stochastic and delay equations for graduate students in applied mathematics, physics and engineering.” (Boris V. Loginov, Zentralblatt MATH, Vol. 1203, 2011)