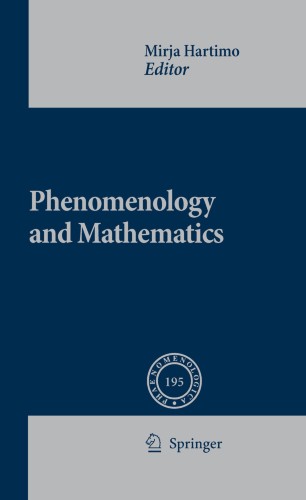 The present collection gathers together the contributions of the world leading scholars working in the intersection of phenomenology and mathematics. During Edmund Husserl’s lifetime (1859-1938) modern logic and mathematics rapidly developed toward their current outlook and Husserl’s writings can be fruitfully compared and contrasted with both 19th century figures such as Boole, Schröder and Weierstrass as well as the 20th century characters like Heyting, Zermelo, and Gödel. Besides the more historical studies, both the internal ones on Husserl alone and the external ones attempting to clarify his role in the more general context of the developing mathematics and logic, Husserl’s phenomenology offers also a systematically rich but little researched area of investigation. The present volume aims to establish the starting point for the development, evaluation and appraisal of the phenomenology of mathematics. It gathers the contributions of the main scholars of this emerging field into one publication for the first time. Combining both historical and systematic studies from various angles, the volume charts answers to the question "What kind of philosophy of mathematics is phenomenology?"