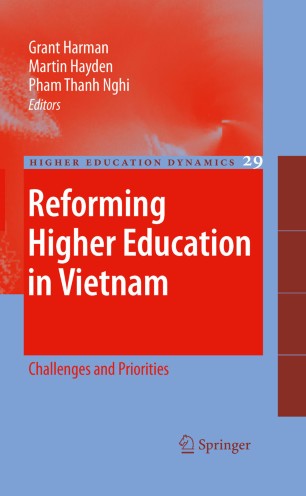 Here is a comprehensive and scholarly review of various dimensions of the higher education system in Vietnam. The book comes at a crucial time for this South East Asian country’s learning institutions. Vietnam is a dynamic regional player and, like its neighbors, is seeking rapid development of its higher education system. Since reform was first mooted in 1993, the numbers of young people going on to higher education have increased dramatically – up from 2 per cent in the early 1990s to over 13 per cent at present, and a higher system that was once comprised entirely of small, specialised institutions has been transformed into one in which the leading universities are large, multidisciplinary and progressively developing a research capability.

Vietnam’s current approach to reform of its higher education system is extremely ambitious. Some argue that the nation may be at risk of attempting to do too much too quickly. By 2020, for example, Vietnam expects its higher education system to be advanced by modern standards and highly competitive internationally. This optimistic vision faces many challenges. The economy’s rapid growth masks a reliance on unskilled labor and the exploitation of natural resources, while decision-making in many areas of public life continues to be hamstrung by over-regulation and centralized control. A great many goals and objectives have been set for reform of the higher education system during the next decade. Realising these aspirations will require some difficult shifts in the management culture, as well as a great deal more public investment.

Against this backdrop, the chapters included in this book cover a wide range of relevant topics, including the recent history of the higher education system, its structure and governance, and its teaching and learning culture. Chapters also examine Vietnamese universities’ research and research commercialization environment, their socio-economic impact, strategic planning processes, progress with quality accreditation, and their experience of internationalization and privatization.