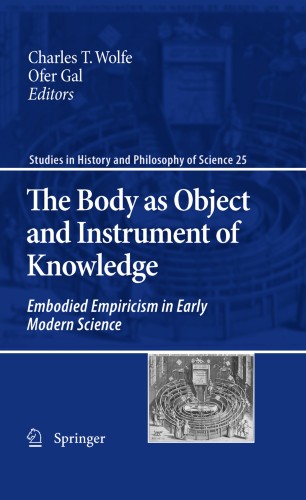 The Body as Object and Instrument of Knowledge

Part of the Studies in History and Philosophy of Science book series (AUST, volume 25)

It was in 1660s England, according to the received view, in the Royal Society of London, that science acquired the form of empirical enquiry we recognize as our own: an open, collaborative experimental practice, mediated by specially-designed instruments, supported by civil discourse, stressing accuracy and replicability. Guided by the philosophy of Francis Bacon, by Protestant ideas of thisworldly benevolence, by gentlemanly codes of decorum and by a dominant interest in mechanics and the mechanical structure of the universe, the members of the Royal Society created a novel experimental practice that superseded former modes of empirical inquiry, from Aristotelian observations to alchemical experimentation.

This volume focuses on the development of empiricism as an interest in the body – as both the object of research and the subject of experience. Re-embodying empiricism shifts the focus of interest to the ‘life sciences’; medicine, physiology, natural history. In fact, many of the active members of the Royal Society were physicians, and a significant number of those, disciples of William Harvey and through him, inheritors of the empirical anatomy practices developed in Padua during the 16th century. Indeed, the primary research interests of the early Royal Society were concentrated on the body, human and animal, and its functions much more than on mechanics. Similarly, the Académie des Sciences directly contradicted its self-imposed mandate to investigate Nature in mechanistic fashion, devoting a significant portion of its Mémoires to questions concerning life, reproduction and monsters, consulting empirical botanists, apothecaries and chemists, and keeping closer to experience than to the Cartesian standards of well-founded knowledge.

These highlighted empirical studies of the body, were central in a workshop in the beginning of 2009 organized by the unit for History and Philosophy of Science in Sydney. The papers that were presented by some of the leading figures in this area are presented in this volume.