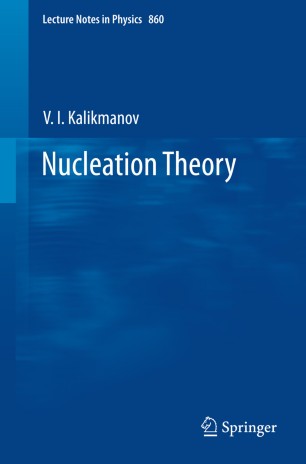 This monograph covers the major available routes of theoretical research of nucleation phenomena––phenomenological models, semi-phenomenological theories, density functional theories and microscopic approaches––with emphasis on the formation of liquid droplets from a metastable vapor. It also illustrates the application of these various approaches to experimentally relevant problems.

In spite of familiarity with the involved phenomena, it is still not possible to accurately calculate nucleation rate, as the properties of the daughter phase are insufficiently known.

Existing theories based upon the classical nucleation theory have on the whole explained the trends in behavior correctly. However, they often fail spectacularly to account for new data, in particular in the case of binary or, more generally, multi-component nucleation. This book challenges such classical models and provides a more satisfactory description by using density functional theory and microscopic computer simulations to describe the properties of small clusters. Also, semi-phenomenological models are proposed that relate the properties of small clusters to known properties of the bulk phases.

This monograph is an introduction as well as a compendium to researchers in the areas of  soft condensed matter physics, chemical physics, graduate and post-graduate students in physics and chemistry starting on research in the area of nucleation, and to experimentalists wishing to gain a better understanding of the recent developments being made to account for their data.