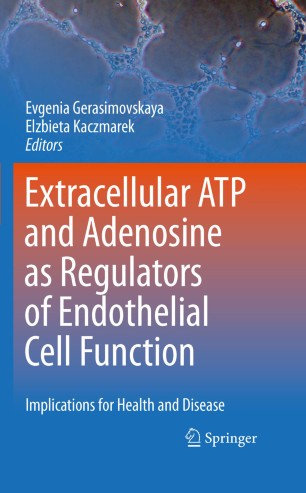 Extracellular ATP and Adenosine as Regulators of Endothelial Cell Function

Implications for Health and Disease

Extracellular purines and pyrimidines (ATP, ADP, UTP and adenosine) are released into the extracellular milieu in response to a variety of stress conditions and act as important regulators of vascular homeostasis.

This new book is uniquely focused on the signaling actions of extracellular purines in endothelial cells and the crucial role of extracellular purines in regulation of angiogenesis, vascular tone, cell permeability, wound healing, inflammation and cell-to-cell communication.
This book examines the responses of endothelial cells, originating from various tissues (such as cornea, pancreas and uterus), to extracellular nucleotides and adenosine under physiological and pathological conditions, i.e. pregnancy, hypoxia, hypertension, inflammation and diabetes.
In the book’s 12 chapters, the role of purinergic signaling in endothelium-dependent tissue perfusion, regulation of endothelial barrier function, and angiogenesis are discussed. The mechanisms of ATP release and its role in intercellular communication are also presented.
In addition, the book provides the most up to date mechanisms of extracellular nucleotide metabolism by purine-converting ecto-enzymes and their contribution to purinergic signaling in endothelial cells originating from various vascular beds.

This book is a valuable resource for biomedical research scientists, clinical scientists, graduate students and health science professionals interested in the mechanisms of extracellular purine function in endothelial cells under physiologic and pathologic conditions.