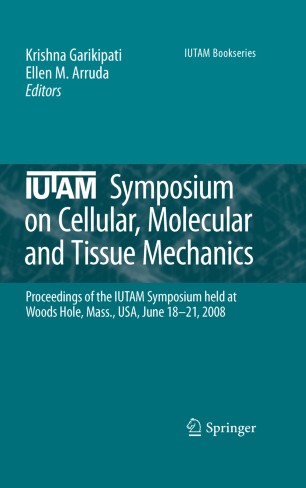 These are the proceedings of an IUTAM Symposium on Cellular, Molecular and Tissue Mechanics, held in the summer of 2008 at Woods Hole, Mass, USA. This groundbreaking meeting brought together mechanicians having an interest in biological systems, with biophysicists and biologists in order to address the mechanical basis of biology at the molecular, cellular and tissue scales.

The meeting explored a wealth of phenomena in cell and molecular biology all of which display a breadth of mechanical influences that may seem surprising at first glance to the traditional mechanician. This arena for the application of methods developed in mechanics has not drawn as much attention as more traditional tissue biomechanics. However, biophysicists, and even biologists apply ideas of elasticity and structural mechanics quite widely in studying molecules and cells. Many critical functions of biomolecules and cells are fundamentally mechanical in origin, and the mechanics of many biomolecules demonstrate scaling laws that are non-classical to traditional structural mechanics and elasticity.

This compilation of the scientific papers presented at the meeting will prove invaluable to researchers in the mechanics of biology as this field develops in the decades to come and takes its place as an acknowledged and central area in biology.