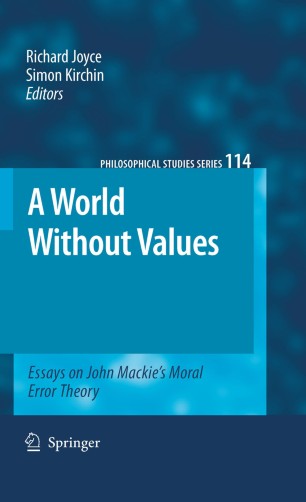 A World Without Values

For centuries, certain moral philosophers have maintained that morality is an illusion, comparable to talking of ghosts or unicorns. These moral skeptics claim that the world simply doesn’t contain the sort of properties (such as moral badness, moral obligation, etc.) necessary to render moral statements true. Even seemingly obvious moral claims, such as "killing innocents is morally wrong" fail to be true. What would lead someone to adopt such a radical viewpoint? Are the arguments in its favor defensible or plausible? What impact would embracing such a view have on one’s practical life?

Taking as its point of departure the work of moral philosopher John Mackie (1917-1981), A World Without Values is a collection of essays on moral skepticism by leading contemporary philosophers, some of whom are sympathetic to Mackie’s views, some of whom are opposed. Rather than treating moral skepticism as something to dismiss as quickly as possible, this anthology is a comprehensive exploration of the topic, and as such will be a valuable resource for students of moral philosophy at all levels, as well as professionals in the field of meta-ethics. A World Without Values presents state-of-the-art arguments that advance the ongoing philosophical debate on several fronts, and will enjoy an important place on any meta-ethicist’s bookshelf for some years to come.