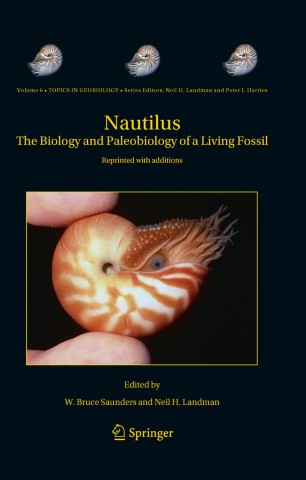 The Biology and Paleobiology of a Living Fossil, Reprint with additions

Part of the Topics in Geobiology book series (TGBI, volume 6)

This volume is a reprint of a classic book about Nautilus, first published in 1987, with an introductory chapter summarizing all of the work on Nautilus and its habitat since the publication of the first edition more than 20 years ago. The surge in articles in the last two decades indicates an expanded interest in the subject, reflecting a renewed appreciation of the complexity and fragility of the marine habitat and its biota. The 37 chapters are written by 48 experts in the field and cover all aspects of this living fossil from its ecology to its embryology. This volume also features new photos, including an impressive image of the first hatched Nautilus in captivity. Nautilus is an iconic animal in the marine realm and represents part of the diverse fauna of the Indo-Pacific. It is also a member of a lineage of shelled cephalopods dating back more than 400 million years. As a result, this volume will be relevant to the fields of marine science, evolutionary biology, and paleontology.