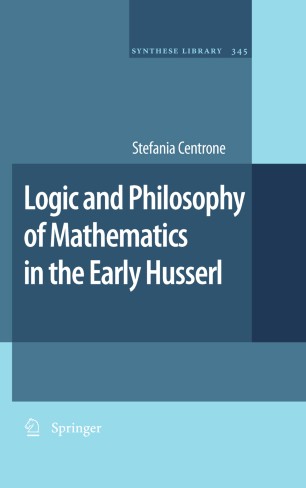 Logic and Philosophy of Mathematics in the Early Husserl

Logic and Philosophy of Mathematics in the Early Husserl focuses on the first ten years of Edmund Husserl’s work, from the publication of his Philosophy of Arithmetic (1891) to that of his Logical Investigations (1900/01), and aims to precisely locate his early work in the fields of logic, philosophy of logic and philosophy of mathematics. Unlike most phenomenologists, the author refrains from reading Husserl’s early work as a more or less immature sketch of claims consolidated only in his later phenomenology, and unlike the majority of historians of logic she emphasizes the systematic strength and the originality of Husserl’s logico-mathematical work.

The book attempts to reconstruct the discussion between Husserl and those philosophers and mathematicians who contributed to new developments in logic, such as Leibniz, Bolzano, the logical algebraists (especially Boole and Schröder), Frege, and Hilbert and his school. It presents both a comprehensive critical examination of some of the major works produced by Husserl and his antagonists in the last decade of the 19th century and a formal reconstruction of many texts from Husserl’s Nachlaß that have not yet been the object of systematical scrutiny.

This volume will be of particular interest to researchers working in the history, and in the philosophy, of logic and mathematics, and more generally, to analytical philosophers and phenomenologists with a background in standard logic.