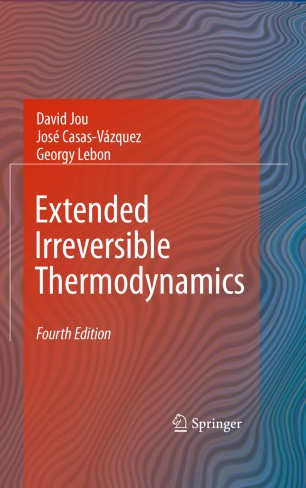 This is the 4th edition of the highly acclaimed monograph on Extended Irreversible Thermodynamics, a theory that goes beyond the classical theory of irreversible processes. In contrast to the classical approach, the basic variables describing the system are complemented by non-equilibrium quantities. The claims made for extended thermodynamics are confirmed by the kinetic theory of gases and statistical mechanics. The book covers a wide spectrum of applications, and also contains a thorough discussion of the foundations and the scope of the current theories on non-equilibrium thermodynamics.
For this new edition, the authors critically revised existing material while taking into account the most recent developments in fast moving fields such as heat transport in micro- and nanosystems or fast solidification fronts in materials sciences. Several fundamental chapters have been revisited emphasizing physics and applications over mathematical derivations.
Also, fundamental questions on the definition of non-equilibrium temperature, entropy, fluctuations of fluxes and boundary conditions are revisited and presented in a modern way.
Detailed solutions for more than 130 problem sets presented in this book, as well as a wide bibliography on extended irreversible thermodynamics are accessible at the http://telemaco.uab.es site.