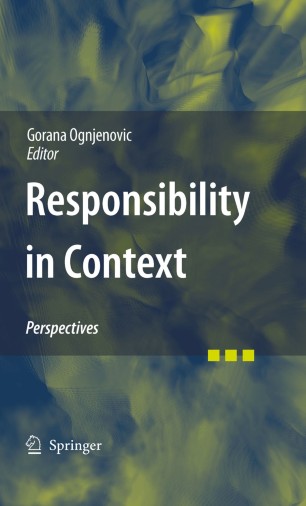 This path breaking volume raises a number of necessary questions related to various aspects of responsibility for others through its multidisciplinary approach. Unlike its predecessors it takes a starting point in various empirical contexts and consequently draws conclusions from there on.

The importance of the topic is reflected by absolute domination of neo-liberalism: facing a dismantling of the welfare state, privatization and the spread of "privatist" mentality in the era of individualization. The economic rationality sets the values that we are expected to live up to, reincarnating yet again the classical Frankfurt School diagnosis: politics are determined by economy.

The importance of the method is reflected by taking real life situations as a starting point. In doing so, the method also challenges the current trend science generally where concepts are kidnapped from their native contexts, and recycled: re-used in contexts unnatural to them, where the only reality that matters is the one determined by the scientists’ ability to define it.

This volume rejects the neo-liberal paradigm of ‘responsibility’ as the only valid interpretation of reality. Therefore academics, undergraduate and graduate students, as well as general readers will find this volume thought provoking.

"….the commitment to situating questions of responsibility in social contexts – this is something that is neglected in philosophy and only recently coming to the fore in sociology."
Keith Tester, co-author of Bauman Before Postmodernity: Invitation, Conversations and Annotated Bibliography 1953-1989, author of The Social Thought of Zygmunt Bauman (2004), Conversations with Zygmunt Bauman (2001).

"This project is an original and valuable contribution to discussion of these important issues,... a good text for graduate and senior undergraduate texts in political theory, political philosophy, moral philosophy, and social and political thought."
Lorraine Code, author of Ecological Thinking, The Politics of Epistemic Location (2006); Encyclopaedia Of Feminist Theories (2000); Feminist Interpretations Of Hans-Georg Gadamer (2003).