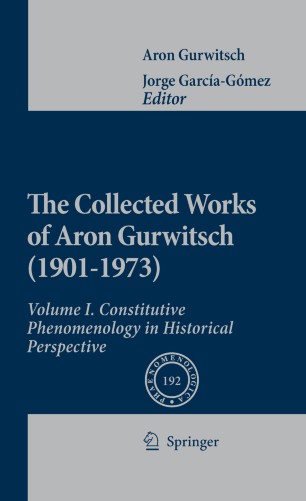 The first of a planned six volumes of Gurwitsch’s writings, this volume contains, above all, the English translation of his Esquisse de phénoménologie constitutive, the text based on his four lecture courses at Institute d’Histoire des Sciences et des Techniques at the Sorbonne during the 1930s. These lectures were regularly attended by Maurice Merleau-Ponty. The book relates Husserlian or constitutive phenomenology to modern first philosophy and the philosophy of the human as well as the natural sciences and was nearly finished when Gurwitsch had to flee to the United States before Germany conquered France. In addition, this volume contains what is in effect Gurwitsch’s autobiographical sketch, critical reviews of works by Gaston Berger, Jean Hering, Maurice Merleau-Ponty, Maurice Pradines, and Ives Simone, members of the French intellectual milieu of the 1930s when French phenomenology initially developed, and also two originally unpublished essays from that period. Finally, there are three essays and two reviews from Gurwitsch’s American period in which phenomenological philosophy and especially his revised account of the noema is also placed in historical perspective.