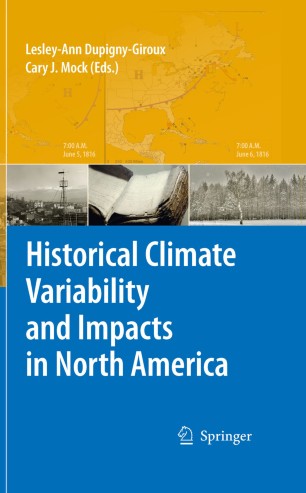 Climatologists with an eye on the past have any number of sources for their work, from personal diaries to weather station reports. Piecing together the trajectory of a weather event can thus be a painstaking process taking years and involving real detective work. Missing pieces of a climate puzzle can come from very far afield, often in unlikely places. In this book, a series of case studies examine specific regions across North America, using instrumental and documentary data from the 17th to the 19th centuries. Extreme weather events such as the Sitka hurricane of 1880 are recounted in detail, while the chapters also cover more widespread phenomena such as the collapse of the Low Country rice culture. The book also looks at the role of weather station histories in complementing the instrumental record, and sets out the methods that involve early instrumental and documentary climate data. Finally, the book’s focus on North America reflects the fact that the historical climate community there has only grown relatively recently. Up to now, most such studies have focused on Europe and Asia.

The four sections begin with regional case studies, and move on to reconstruct extreme events and parameters. This is followed by the role of station history and, lastly, methodologies and other analyses. The editors’ aim has been to produce a volume that would be instrumental in molding the next generation of historical climatologists. They designed this book for use by general researchers as well as in upper-level undergraduate or graduate level courses.

Editor Dr. Lesley-Ann Dupigny-Giroux received her Ph.D. in Climatology and Geographic Information Systems from McGill University in 1996 and has since held a variety of professorships and research positions. Dr. Dupigny-Giroux currently serves as the Vermont State Climatologist and teaches at the University of Vermont. She has also authored and co-authored numerous scholarly publications and delivered many presentations. Dr. Dupigny-Giroux is additionally the member of such scientific affiliations as the American Associated of State Climatologists and the American Geophysical Union.

Editor Dr. Cary J. Mock received a Ph.D. in Geography from the University of Oregon in 1994; Dr. Mock has since served as a professor of various courses and has pursued his research interests of synoptic climatology and paleoclimatology among others. Dr. Mock has also written numerous scholarly articles, papers, and other publications. Dr. Mock currently serves as the Principle Investigator for both the National Science Foundation's Earth System History and Paleoclimate Program and the National Oceanic and Atmospheric Administration and the National Climate Data Center.

From the reviews: “Readers interested in reconstructing past climate events in the US will find this book a useful reference tool. One realizes, while reading this work, that the ability to fully understand and reconstruct the characteristics of historical climate events/extremes requires a complex and exhaustive research approach. … Most chapters are well referenced, written in fascinating detail, and easy to read. Summing Up: Recommended. Upper-division undergraduates and above with an interest in historical climatology.” (D. Changnon, Choice, Vol. 47 (10), June, 2010)
Buy options