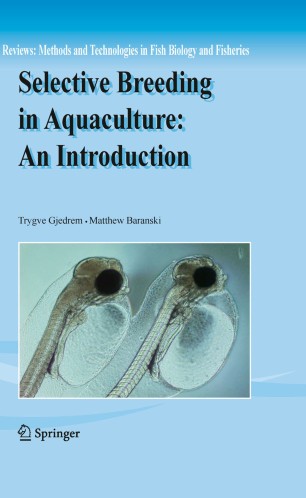 Selective Breeding in Aquaculture: An Introduction

Part of the Reviews: Methods and Technologies in Fish Biology and Fisheries book series (REME, volume 10)

This book provides a basic introduction to selective breeding in aquatic species, and describes the concepts behind establishing and running successful breeding programs. Although only 10% of world aquaculture production is currently based on genetically improved stocks, the dramatic gains achieved in species such as Atlantic salmon and tilapia serve to demonstrate the potential of selective breeding to improve growth, product quality, disease resistance and other commercially important traits. As increasing pressure is placed on feed, land and water resources, there is a growing need for such programs to be implemented on a large scale in aquaculture.

The major objective of this book is to introduce selective breeding to a wider audience, using results of numerous studies to show that the high fecundity and genetic variation in most aquatic species can lead to rapid and dramatic improvements. Building on well-established methods based on quantitative genetic theory, the key role that molecular genetics will play in the future of aquaculture breeding is also discussed.

The text was written by Trygve Gjedrem (chapters on breeding theory and planning breeding programs) and Matthew Baranski (biotechnology chapter and general contributions), scientists at one of the world’s leading food and aquaculture research institutes, Nofima Marin.