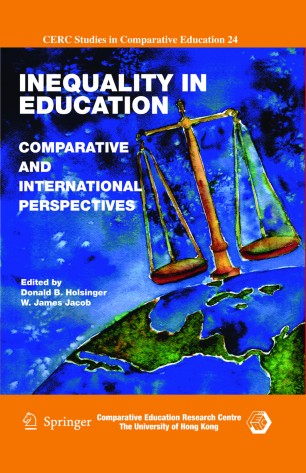 Inequality in Education: Comparative and International Perspectives is a compilation of conceptual chapters and national case studies that includes a series of methods for measuring education inequalities. The book provides up-to-date scholarly research on global trends in the distribution of formal schooling in national populations. It also offers a strategic comparative and international education policy statement on recent shifts in education inequality, and new approaches to explore, develop and improve comparative education and policy research globally. Contributing authors examine how education as a process interacts with government finance policy to form patterns of access to education services. In addition to case perspectives from 18 countries across six geographic regions, the volume includes six conceptual chapters on topics that influence education inequality, such as gender, disability, language and economics, and a summary chapter that presents new evidence on the pernicious consequences of inequality in the distribution of education. The book offers (1) a better and more holistic understanding of ways to measure education inequalities; and (2) strategies for facing the challenge of inequality in education in the processes of policy formation, planning and implementation at the local, regional, national and global levels.

“The work, edited by Donald B. Holsinger and W. James Jacob, presents striking global evidence of a certain closing of the inequality gap in numerous countries. … it has been carried out clearly and offers a practical order for the presentation of evidence and discussion. … offer valuable contributions to the subject of inequality in education. … Holsinger and Jacob’s volume provides particularly helpful information about trends and possible remedies.” (Marcelo Caruso, Comparative Education Review, August, 2010)

“Inequality in Education: Comparative and International Perspectives is a strong contribution to the field of comparative education because it offers conclusions and recommendations to the problems of inequality and inequity while at the same time strongly maintaining the importance of the fundamentals and cultures of each country studied. … welcome addition to the repertoire of comparative education scholars. … an exciting and creative attempt to reflect upon current policies that lie at the heart of building up our understanding of equity and equality in education.” (Ali Ait Si Mhamed, Internationale Zeitschrift für Erziehungswissenschaft, Vol. 56 (4), 2010)

Education and Social Inequality in the Global Culture

"For critical observers, the persistent issue of social inequality in the field of education and schooling represents one of the greatest sources of frustration. Whereas issues related to pedagogy, teaching cultures, and school expansion achieve some improvement in many settings, inequality based on race, gender, income, religion, and culture in schools is still blatant in the field of education. The repeated diagnosis of these inequalities in scholarly work evokes adamant opposition of the privileged (and countless), mostly unfruitful attempts to overcome (or at least to mitigate) its most severe manifestations. On the whole, the general impression is that after decades of compensatory measures and a fair number of pro-poor and pro-women initiatives, the educational gap is not shrinking. Research on inequality in education remains an issue of undiminished significance. Ambitious theoretical drafts for a deeper understanding of the production,logic, and possible remedies for social inequality in education have been advanced from very different perspectives in the last decades. A wide range of factors have been identified as being responsible for the persistence of inequality in education.

Yet beyond all details regarding the particular configurations of inequality in local settings, a diffuse view of the structural character of inequality in capitalist societies—and also in communist societies, as set forth by Pierre Bourdieu 40 years ago—prevails. Fueled by resignation, a new realism in the social sciences suggests that inequality is something we would be better off learning to deal with rather than trying to overcome.

Faced with these low expectations, two recently edited books convey very different messages regarding the persistence of inequality in an international and global perspective. The volume edited by Joseph Zajda, Karen Biraimah, and William Gaudelli offers 11 chapters that deal with the issue extremely critically. The book aims at discussing the factors determining social inequality in education in the context of global culture. However, the bulk of research presented in the volume addresses varying national situations. Only two chapters refer to world regions, such as central and eastern Europe and the Islamic nation-states; only one contribution works with data from the Program for International Student Assessment and the Trends in International Mathematics and Science Study and could be characterized as having a more global perspective. The works edited in the volume criticize the persistence of old inequalities and the emergence of new ones in multicultural settings.

The second volume, however, contains some good news about inequalities in

education. The work, edited by Donald B. Holsinger and W. James Jacob, presents striking global evidence of a certain closing of the inequality gap in numerous countries. Perhaps because of the close relationships of many of the authors to international funding donors, this volume is a blend of critical, even radical, critique and a search for promising policy strategies. The 24 contributions also address conditions in several countries, whereas other contributions focus on world regions. Probably the only genuine global contribution is the analysis by Vinod Thomas and Yan Wang, who use a huge data set to follow the development of some indicators of inequality in 140 countries between 1960 and 2000. The editors have chosen different strategies for organizing the two volumes. Holsinger and Jacob have ordered the contributions according to world regions, reserving the first section for conceptual issues. Although the approach is certainly conventional, it has been carried out clearly and offers a practical order for the presentation of evidence and discussion. Their introduction is a substantive piece

of scholarship, in which definitions of equality and equity, analytical trends concerning the concept, and different measurements of educational inequality are concisely outlined. An unexpected plea by the editors for loyalty to and admiration for the World Bank does not diminish the value of the balanced arguments. These include a good and brief review of the literature on the subject. In view of this achievement, the editing done by Zajda, Biraimah, and Gaudelli is of inferior quality. In a book addressing global culture as the crucial environment for the analysis of local inequalities, the treatment of the leading category of globalization is somewhat unfruitful. The specific features of a culture that has become global are completely absent; only some salient features of the process of globalization are briefly addressed. The main analytical lines chosen by the editors for the presentation and ordering of the contributions—hegemony, equity, and cultural capital—are undoubtedly significant themes. Yet their reluctance to advance a comprehensive approach to the promising concept of global culture and its dimensions is apparent. In addition, poor editing and layout problems reinforce the impression that a sparse amount of editing has been done. Despite these critical comments, the volume contains some highlights regarding research on inequalities in education. The discussions by Diane M. Hoffman and Guoping Zhao of a pervading Western individualism in Chinese childhood ideologies clearly refer to the tensions between the global and the local. Caroline E. Parker’s measuring of inequities in different urban settings in Nicaragua presents

unexpected evidence about school attendance and dropout rates. Kara Janigan’s work on female students in Eritrea describes strategies young women in a rural region of the country have developed to overcome the structural disadvantages they face. Very promising analyses, like those by Mary Holbrock about the Mayan revival in Guatemala or by Nagwa M. Megahed on Egyptian secondary teachers facing a reform alleviating the effects of school tracking, could have been more substantial and included broader data sets and more thorough theoretical perspectives.

Other contributions are rather disappointing because of the very superficial

discussion of their interesting findings. The work presented by Gillian

Hampden-Thompson, Lina Guzman, and Laura Lippman on evidence related to

the theoretical assumptions of the effects of cultural capital on students’ performance and skills is of utmost significance. Their approach is fruitful and yet, at the same time, frustrating. It is fruitful because they show that the assumed direct relationship between cultural capital and school performance and literacy is not unequivocal. It is also frustrating because the findings tend to confirm the thesis advanced by Bourdieu on social reproduction that underlies the more pessimistic diagnosis regarding the power of education in alleviating social inequalities. It is exactly at the intersection of huge data sets and theoretical conceptual work where future research on inequalities could make significant advances. In contrast, good news stands out in Holsinger and Jacob’s volume. The alreadymentioned article by Thomas and Wang shows a quite consistent decrease in inequality when taking into consideration some indicators like the gender and urban/rural gap as well as attendance and completion rates for elementary/primary schools. They work with an old measurement of inequality, the Gini coefficient, which was developed at the beginning of the twentieth century and widely used

for the measurement of income inequality. Thomas and Wang, along with other contributions in the volume, apply it now to the field of education. Using this and other indicators, the evolution of Korean education presented by Matthew E. Burt and Namgi Park shows the striking advancement of educational attainment and educational equality in this country. Luis Crouch, Martin Gustafsson, and Pablo Lavado provide a comparison between Peru and South Africa. In these countries, a narrowing of the inequality gap, measured by Gini coefficients and other indicators, shows consistent improvement.

Holsinger and Jacob’s collection exceeds the quantitative approach of these

contributions and also focuses on the varying forms of inequality and on theoretical approaches related to almost forgotten big theories. This applies particularly to David Hill, Nigel M. Greaves, and Alpesh Maisuria’s essay with the suggestive title “Does Capitalism Inevitably Increase Inequality?” Their discussion also includes the results of empirical work and does not confine itself to a renewed exegesis of Marx. The postcolonial perspective taken by Birgit Brock-Utne in her discussion of the implications of English as a language of instruction in some African countries also illuminates new emerging forms of inequality due to the impact of global forces. Several chapters present additional relevant evidence about measuring inequalities,

while sometimes addressing the subject of functioning compensatory

policies. Beyond content issues, the professional background of many authors as consultants and advisors seems to have determined a style of presenting evidence and discussing it, which is sometimes highly uniform and repetitive. Well-written discussions also need good textual performance, not only good evidence.

On the whole, these two volumes offer valuable contributions to the subject

of inequality in education. New paths of measuring, new forms of inequality, and new policy strategies are addressed differently in both collections. Holsinger and Jacob’s volume provides particularly helpful information about trends and possible remedies. The tension between in-depth studies and more global perspectives is unavoidable, and, in this respect, it would be desirable to have a more reflective attitude by some authors about the reach, significance, and weaknesses of the data presented and the theses advanced. Highly popular simplifications about quantitative research as being solely the long arm of neoliberal tendencies are sharply challenged by many of these contributions. After all, solid quantitative research has also set forth pertinent evidence about the limited benefits, if any, of privatization,vouchers, and charter schools.In spite of the current crisis caused by untamed greed and organized irresponsibility,capitalism will not abdicate in the near future. We will have to face the issue of inequality in education under capitalist conditions for a long time.Interesting findings about school systems guaranteeing high performance for all children, such as those in Cuba, do not provide us with a transferable model of educational equality and equity. In this sense, differentiated diagnoses on the persistent issue of inequality and a critical assessment of the policies addressing it are still needed. This kind of work will be crucial for comparative education well after the dust of the finance crisis settles."