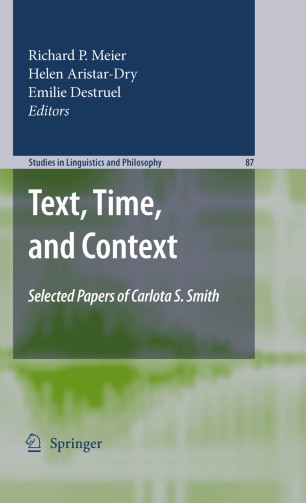 Part of the Studies in Linguistics and Philosophy book series (SLAP, volume 87)

Carlota S. Smith was a key figure in linguistic research and a pioneering woman in generative linguistics. This selection of papers focuses on the research into tense, aspect, and discourse that Smith completed while Professor of Linguistics at the University of Texas at Austin. Smith, who died in 2007, was a trailblazer in her field whose broad interests fed into her scholarly research.

Selected by Carlota Smith herself and by her longtime friends and colleagues, this book contains her 1980 piece on temporal structures in discourse, her 1986 comparison of the English and French aspectual systems, a 1996 paper on the aspect system in Navajo (an increasingly-endangered language which Smith worked to preserve), and her 1980 and 1993 papers on the child’s acquisition of tense and aspect.

The current volume of articles covers much of her most fruitful work on the way in which language is used to express time, and will be essential reading for many working and studying in linguistics generally and in semantics particularly.