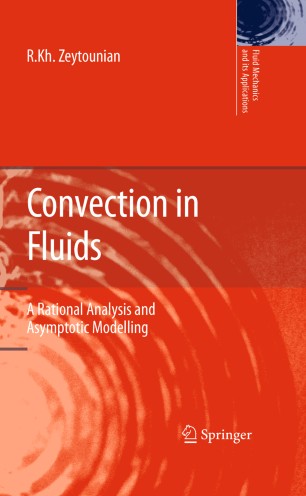 Part of the Fluid Mechanics and its Applications book series (FMIA, volume 90)

In the present monograph, entirely devoted to “Convection in Fluids”, the purpose is to present a unified rational approach of various convective phenomena in fluids (mainly considered as a thermally perfect gas or an expansible liquid), where the main driving mechanism is the buoyancy force (Archimedean thrust) or temperature-dependent surface tension in homogeneities (Marangoni effect). Also, the general mathematical formulation (for instance, in the Bénard problem - heated from below)and the effect of the free surface deformation are taken into account. In the case of the atmospheric thermal convection, the Coriolis force and stratification effects are also considered.

The main motivation is to give a rational, analytical, analysis of main above mentioned physical effects in each case, on the basis of the full unsteady Navier-Stokes and Fourier (NS-F) equations - for a Newtonian compressible viscous and heat-conducting fluid - coupled with the associated initiales (at initial time), boundary (lower-at the solid plane) and free surface (upper-in contact with ambiant air) conditions. This, obviously, is not an easy but a necessary task if we have in mind a rational modelling process with a view of a numerical coherent simulation on a high speed computer.