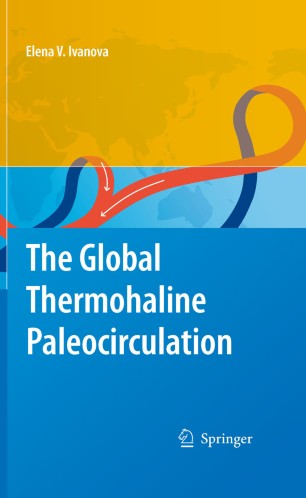 Originally published in Russian in 2006, this is the first English translation of this important book on paleoceanography and paleoclimatology. Its initial publication was followed by a surge of interest in this subject prompting the author to revise and translate her original work. In the book, she successfully summarizes her own research over recent years and compiles an overview of up-to-date knowledge on past ocean circulation.

The key topics include:

- Methods and proxies of paleoceanographic reconstruction

- Influence of the global thermohaline circulation on paleoceanographic events in the Eurasian Arctic seas, the Northern Indian Ocean, and the South China Sea

- The role of the thermohaline circulation in global teleconnections in the Antarctic, Eurasian Arctic, northern Pacific and low latitudes Indo-Pacific.

Comprehensive investigation of hundreds of international publications and her own results, convinced the author that the global thermohaline circulation controls the remote teleconnections on millennial-scale and partly on centennial-scale, while short-term climate signals are mainly transferred by the atmosphere.

Dr. Elena V. Ivanova is Senior Research Scientist and head of the Paleoceanography Team at the Russian Academy of Sciences’ Shirshov Institute of Oceanology in Moscow. She is a member of the Russian Paleontological Society, The Micropaleontological Society, the American Geophysical Union, and was a Russian representative in IMAGES (the International Marine Global Change Study) from 1998 to 2007. In this book she reviews the data collected during 10 marine cruises including the IMAGES MONA cruise and a Russian-Norwegian cruise in the Barents Sea in 2004, where she served as a Chief Scientist.

Elena Ivanova is a member of Russian Paleontological Society and of the American Geophysical Union and a Russian representative in IMAGES (The International Marine Core Study) Program. Her book is based on her Habilitation Thesis defended at Shirshov Institute of Oceanology in 2003. She collected the material for her book during 10 marine cruises including the IMAGES MONA cruise, and Russian-Norwegian cruise in the Barents Sea in 2004 where Elena Ivanova was a Chief Scientist. She also worked as a visiting scientist at eight institutes outside of Russia.