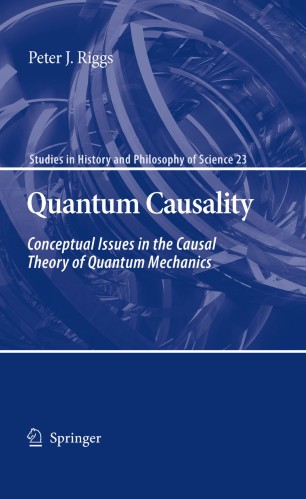 Conceptual Issues in the Causal Theory of Quantum Mechanics

Part of the Studies in History and Philosophy of Science book series (AUST, volume 23)

This is a treatise devoted to the foundations of quantum physics and the role that causality plays in the microscopic world governed by the laws of quantum mechanics. There is no sharp dividing line between physics and philosophy of physics. This is especially true for quantum physics where debate on its interpretation and the status of the various entities postulated has raged in both the scientific and philosophical communities since the 1920s and continues to this day. Although it is readily granted that quantum mechanics produces some strange and counter-intuitive results, it is argued in Quantum Causality that quantum mechanics is not as weird as we might have been led to believe.

The Causal Theory is not well known within the physics community and many physicists who do know of it are generally dismissive in their attitudes. This is a historical legacy inherited by the majority of the physics community from the most influential founders of quantum mechanics, Niels Bohr and Werner Heisenberg. They both denied the independent existence of a quantum level of reality and declared that causality does not apply to quantum events.

Quantum Causality shows that the Causal Theory of Quantum Mechanics is a viable physical theory that provides realistic explanations for quantum phenomena. Much of what is argued for in this book will be controversial but, at the very least, these arguments will likely engender some lively debate on the various issues raised.