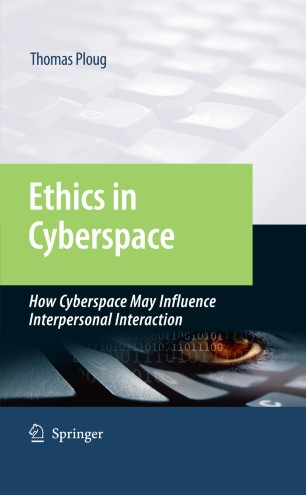 How Cyberspace May Influence Interpersonal Interaction

Over the last few decades information and communication technology has come to play an increasingly prominent role in our dealings with other people. Computers, in particular, have made available a host of new ways of interacting, which we have increasingly made use of. In the wake of this development a number of ethical questions have been raised and debated. Ethics in Cyberspace focuses on the consequences for ethical agency of mediating interaction by means of computers, seeking to clarify how the conditions of certain kinds of interaction in cyberspace (for example, in chat-rooms and virtual worlds) differ from the conditions of interaction face-to-face and how these differences may come to affect the behaviour of interacting agents in terms of ethics.

Thomas Ploug’s book is a very significant contribution to the literature of applied ethics. It provides an original and fascinating account of the morally relevant features of interaction in cyberspace and explains the implications that these features have for the moral judgements of agents involved in such interaction. As Ethics in Cyberspace illustrates, cyberspatial interaction raises new ethical challenges that need to be met head-on. This book is indispensable to anyone interested in the application of ethical principles in the modern world.
Professor Søren Holm, PhD, DMed, Cardiff Law School and University of Oslo. Editor-in-Chief, Journal of Medical Ethics

Thomas Ploug’s Ethics in Cyberspace contains a meticulously argued analysis of the ethically relevant differences between interaction inside and outside cyberspace. Ploug’s main focus is on interaction in chat-rooms and various kinds of tele-operation, but the theoretical approach formulated in the book has much wider applicability. Ploug offers an admirably clear conceptual framework and investigates a range of approaches to the subject, all of which will be useful for anyone seeking to develop a philosophical analysis of the moral aspects of interaction in cyberspace. I have no hesitation in recommending this book highly.
Professor Peter Øhrstrøm, PhD, DSc, Information Science, Aalborg University, Denmark. Author of Temporal Logic (Kluwer Academic Publishers, 1995) and co-editor of Arthur N. Prior: Papers on Time and Tense (Oxford University Press, 2003)