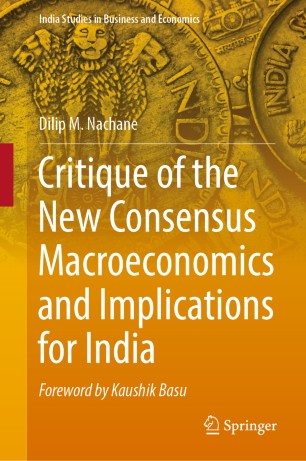 Critique of the New Consensus Macroeconomics and Implications for India

The New Consensus Macroeconomics (NCM), which established itself in the 1980s as mainstream macroeconomics, essentially represents an “uneasy truce” between two dominant schools of economic thought viz. New Classical and Neo-Keynesian economics. The NCM sets the tone for much of the macroeconomic (especially monetary) policy followed by the advanced economies in the period of the Great Moderation (1990–2005). The recent global crisis has posed a major challenge to the NCM as empirical models based on the NCM failed to anticipate the occurrence of the crisis and later its extent and severity.

The above considerations constitute the underpinnings of this book, which addresses the theoretical controversies within a general context and their policy implications for India. The authors’ analysis leads to a somewhat critical assessment of the financial sector policies followed in India since the initiation of reforms in 1991. This makes the book a valuable resource not only for researchers working in this area, but also for policy makers.

“The book is a unique and unparalleled treatment of a complex subject by an eminent economist, which is a must read for academicians, policy makers and financial market participants.  It reflects the author's acknowledged command over the theory and practice of economic policies globally, and his decades of involvement in research and policy  in India in the areas of money and finance. The book should prove   of immense contemporary value in India, where money and finance are currently under stress.”

“Following the Global Financial Crisis of 2008, the basic tenets of mainstream macroeconomics have been increasingly questioned. Dilip Nachane’s authoritative book provides an insightful survey of the debates in modern macroeconomics. The sweep of the book is remarkable, from Marxian and Austrian economics to the New Consensus Macroeconomics. The book is a must-read for all scholars and students of economics”

“Professor Dilip Nachane has achieved a unique feat. He elucidates the emergence and the content of the New Consensus Macroeconomics, the post-crisis critiques of it from a spectrum of perspectives encompassing the Austrian, the Post-Keynesian, the Minskyan, and the Marxist, and the hard lessons learnt from the crisis by the policy makers.  Arguing the need for monetary and financial stability for economic growth and social welfare, he critically analyses the macroeconomic policies and the institutional and political economy aspects of financial liberalization for achieving this purpose, in the context of India.”