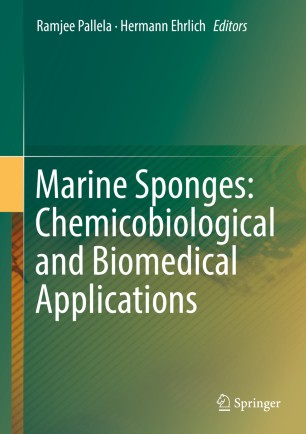 The main focus of this book entitled is to provide an up-to-date coverage of marine sponges and their significance in the current era. This book is an attempt to compile an outline of marine sponge research to date, with specific detail on these bioactive compounds, and their pharmacological and biomedical applications.

The book encompasses twenty chapters covering various topics related to Marine Sponges. Initial couple of chapters deal about the worldwide status of marine sponge research, the recent findings regarding dynamics of sponges, and several interesting research areas, that are believed to be deserving of increased attention. Variety of sponges, their toxicology, metagenomics, pharmaceutical significance and their possible applications in biomedicine has been discussed in detail. The second half of this part includes chapters on chemical ecology of marine sponges followed by the discussion on importance of bioeroding sponges in aquaculture systems. The following four chapters of the book deal majorly with the chemical molecules of marine sponges. In the fifth chapter, marine sponge-associated actinobacteria and their pysicochemical properties have been discussed followed by their bioactive potential. The biological application of marine sponges has been presented in later chapters with the classification of biologically active compounds being explored in detail.The second half of the book presents the vast repertoire of secondary metabolites from marine sponges, which include terpenoids, heterocycles, acetylenic compounds, steroids and nucleosides. Further, the bioactive potential of these compounds has also been discussed.  One of the constituent chapter elaborates the bioactive alkaloids from marine sponges namely, pyridoacridine, indole, isoquinolene, piperidene, quinolizidine, steroidal and bromotyrosine alkaloids isolated from them. In the next couple of chapters, important sponge polymers and the anticancer effects of marine sponge compounds have been presented.

The most interesting aspect of sponge biology is their use in biomedical arena. An effort has been made in this book, to cover the major constituents of sponges and their biomedical potentials. The major portion of sponge body is composed of collagen and silica and used in tissue engineering as scaffold material. This part of the book compiles chapters delineating the isolation of sponge biomaterials including collagen and their use in medical diagnostics. Overall, this book would be an important read for novice and experts in the field of sponge biology.

Dr. Ramjee Pallela is currently working as a Chief Manager at IKP Knowledge Park, Hyderabad, India. His career at IKP has involved igniting scientific brains through meetings and personal interactions, inspiring proposals for start-up grants and mediating the process with BIRAC through IKP. Before his engagement with IKP, Dr. Pallela served as Research Scientist at International Centre for Genetic Engineering and Biotechnology (ICGEB), New Delhi, India.  With a Ph.D.  from Osmania University [CSIR-IICT as pedestal workstation], India, Dr. Pallela has engaged into biomedical research during his postdoctoral stay at South Korea spanning from 2009-2012. He started working towards transplanting his scientific acumen into management roles with a P.G. Diploma in Patent’s Law from the National Academy of Legal Studies and Research (NALSAR) University, Hyderabad, and with an M.B.A degree from Pondicherry University, India. Accolades in his scientific excellence is marked with more than 40 research publications in varied national and international journals/books, which are majorly related to toxicology, marine sponge biology, development of novel biopolymer scaffolds and their applications in bone tissue engineering.

Hermann Ehrlich (1957) after the defense of the PhD thesis (1984) served as a postdoctoral researcher at Max-Bergmann Centre of Biomaterials and Institute of Materials Science in Dresden. After successful habilitation in 2011 at Christian-Albrechts University in Kiel he holds a W3 Heisenberg full professor position at the Institute of Experimental Physics at the TU Bergakademie Freiberg. His research is focused on marine biomaterials, biominerals, biocomposites and biomimetics. Using biochemical, cellular, molecular, and analytical approaches, he and his co-workers, for the first time, discovered and characterized chitin and novel hydroxylated collagen in the skeletal formations of marine sponges. During last ten years, he has published over 70 peer-reviewed articles, eight book chapters, two monographs and additionally holding four patents.

He represented numerous invited and keynote lectures at Columbia University, at Yale University, at Massachusetts Institute of Technology as well. Recently, H. Ehrlich has been nominated for Gottfried Wilhelm Leibniz-Prize 2015.