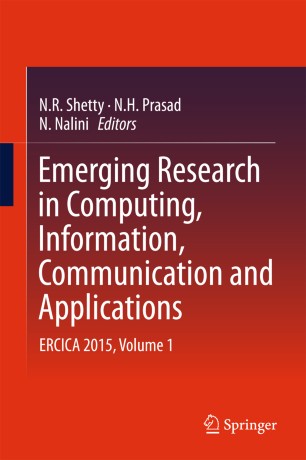 This proceedings volume covers the proceedings of ERCICA 2015. ERCICA provides an interdisciplinary forum for researchers, professional engineers and scientists, educators, and technologists to discuss, debate and promote research and technology in the upcoming areas of  Computing, Information, Communication and their Applications. The contents of this book cover emerging research areas in fields of Computing, Information, Communication and Applications. This will prove useful to both researchers and practicing engineers.

Prof. N R Shetty is former Vice-Chancellor of Bangalore University and President of Indian Society for Technical Education, New Delhi. He is currently leading Nitte Meenakshi Institute of Technology (NMIT), Bangalore. He is also founder Vice-President of International Federation of Engineering Education Societies (IFEES), Washington D.C, USA and President of Forum of Former Vice-Chancellors of Karnataka State universities. He served as Vice Chancellor Bangalore University for two terms and President of ISTE, New Delhi three terms. He was also a Member of the Executive Committee of AICTE and Chairman of South West Region committee of AICTE. He was key contributor in the start up of Nitte Meenakshi Institute of Technology (NMIT) at Bangalore as a technical institution to cater the needs for the engineering profession.

Dr. Prasad N Hamsavath is presently working as Professor and Head, Department of Master of Computer Applications & Advisor - Foreign Students at Nitte Meenakshi Institute of Technology, Bangalore. He has completed his Bachelor of Commerce from Nagarjuna University, Andhra Pradesh in the year 1999 and MCA (2002), M.Tech (2004) and PhD (2012) from Jawaharlal Nehru University, New Delhi, India. Dr. Prasad N H has more than 12 years of experience in different roles in both public and private sector enterprises. He has served as Deputy Director in Software Technology Parks of India (STPI), Ministry of Communication and Information Technology, New Delhi, Government of India from 2005 to 2008 and received the Best Employee award in the year 2007 by then Director-STPI-Noida. He has also served in Educational Consultants India Limited (EdCIL India Limited), Ministry of Human Resource and Development, New Delhi, Govt. of India from 2009-12 as Head of Department for New Initiative Division. He has over 5 years of experience working in the software engineering domain with companies including JK Technologies and Calance Software. He served as guest faculty member for the Birla Institute of Technology, Noida. His research interests include Mobile Ad-hoc Networks (MANET), Information Systems, and Computer Networks. He has served to promote Indian Education abroad under an MHRD initiative, in a number of countries including Nepal, Sri Lanka, Bangladesh, Thailand, Mauritius, Ethiopia, Nigeria, Bhutan, and Oman. He holds lifetime memberships of ISTE, CSI and ACEEE. He has received the prestigious “Dr. Abdul Kalam Life Time Achievement Award” for his services to the community through profession and also received a “Young Faculty” award at 2nd Academic Brilliance Awards hosted by Education Expo Tv at New Delhi.

Dr. Nalini. N is presently working as Professor in the Department of Computer Science and Engineering at Nitte Meenakshi Institute of Technology, Bangalore. She completed her B.E from Kuvempu University in the year 1996 and MS from BITS, Pilani in the year 1999 and her PhD from Visvesvaraya Technological University in the year 2007. She has more than 17 years of teaching and 10 years of research experience. Her research interests are Cryptography and Network Security, Wireless Sensor Networks, and Security issues in Cloud Environment. She has several international publications to her credit. She has received the “Bharath Jyothi Award “by Dr.Bhishma Narain Singh, Former Governor of Tamilnadu and Assam, given out by the India International Friendship Society. She is a lifetime member of ISTE, CSI, ACEEE and IIFS.