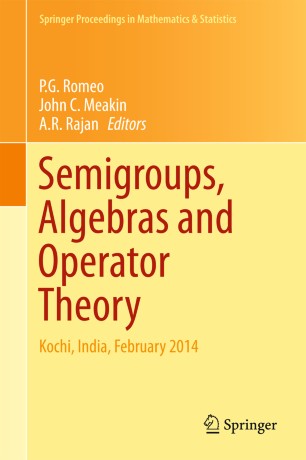 This book discusses recent developments in semigroup theory and its applications in areas such as operator algebras, operator approximations and category theory. All contributing authors are eminent researchers in their respective fields, from across the world. Their papers, presented at the 2014 International Conference on Semigroups, Algebras and Operator Theory in Cochin, India, focus on recent developments in semigroup theory and operator algebras. They highlight current research activities on the structure theory of semigroups as well as the role of semigroup theoretic approaches to other areas such as rings and algebras. The deliberations and discussions at the conference point to future research directions in these areas. This book presents 16 unpublished, high-quality and peer-reviewed research papers on areas such as structure theory of semigroups, decidability vs. undecidability of word problems, regular von Neumann algebras, operator theory and operator approximations. Interested researchers will find several avenues for exploring the connections between semigroup theory and the theory of operator algebras.