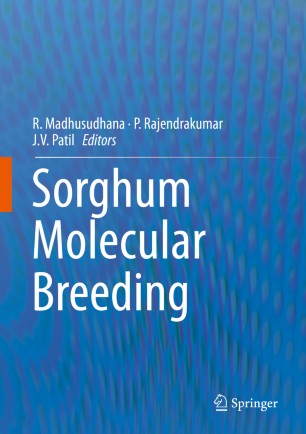 This book provides an up-to-date overview of international research work on sorghum. Its comprehensive coverage of our current understanding of transgenic development in sorghum and the strategies that are being applied in molecular breeding make this book unique. Important areas such as genetic diversity, QTL mapping, heterosis prediction, genomic and bioinformatics resources, post-genome sequencing developments, molecular markers development using bioinformatics tools, genetic transformation and transgenic research are also addressed. The availability of the genome sequence along with other recent developments in sequencing and genotyping technologies has resulted in considerable advances in the area of sorghum genomics. These in turn have led to the generation of a large number of DNA-based markers and resulted in the identification and fine mapping of QTL associated with grain yield, its component traits, biotic and abiotic stress tolerance as well as grain quality traits in sorghum. Though a large volume of information has accumulated over the years, especially following the sequencing of the sorghum genome, until now it was not available in a single reference resource. This book fills that gap by documenting advances in the genomics and transgenic research in sorghum and presenting critical reviews and future prospects. “Sorghum Molecular Breeding” is an essential guide for students, researchers and managers who are involved in the area of molecular breeding and transgenic research in sorghum and plant biologists in general.

Dr. R Madhusudhana is presently working as the Principal scientist (Plant Breeding) at the ICAR-Indian Institute of Millets Research (formerly Directorate of Sorghum Research), Hyderabad, India. He graduated in Agricultural Sciences and completed his Masters in Genetics and Plant Breeding from University of Agricultural Sciences, Dharwad, India. He received his Ph.D. (Genetics) from the Indian Agricultural Research Institute (IARI), a premier institute of higher studies in agricultural sciences located at New Delhi, India. He was awarded with several gold medals for his academic achievements during his Bachelors, Masters and Doctoral studies, and was awarded I rank in Plant Breeding in Agricultural Research Services (ARS), ICAR, New Delhi. He was the recipient of DST-BOYSCAST fellowship and did his post-doc from Institute of Grassland and Environmental Research, Aberystwyth, UK.

He joined ICAR-Indian Institute of Millets Research as a scientist during 1996 and then on successfully handled several national and international projects. He was involved in the development of two sorghum high yielding cultivars, CSH23 and CSV20, which were released for all India cultivation. Presently, he is working on molecular breeding of sorghum employing the tools of DNA markers for QTL mapping of important traits and marker-assisted selection. He has trained several graduate students, guided six Ph.D. and one M.Sc. student. He was also involved in the successful conduct of several training programs at IIMR. He has more than 40 peer reviewed foreign and national journal papers, 4 books & book chapters, and 15 other technical publications to his credit. He is a Life Member in The Indian Society of Genetics and Plant Breeding, New Delhi, India and Society of Millets Research, Hyderabad, India.

Dr. P. Rajendrakumar, born in Puducherry, India pursued his Bachelor’s degree in Agriculture (1990-94), Master’s (1995-97) and Doctoral degree in Plant Breeding and Genetics (1997-2001) from Tamil Nadu Agricultural University, Coimbatore, India. He was a recipient of Dr. R. Appadurai Award, Dr. K. Ramaiah Award and Dr. M.S. Swaminathan Award during Ph.D. After completing Ph.D., he worked as a Research Associate at the Centre for Cellular and Molecular Biology (2001-2004) and Directorate of Rice Research (2004-2008) at Hyderabad, India.

He joined the National Research Centre for Sorghum, Hyderabad, which was upgraded to Directorate of Sorghum Research and recently to ICAR-Indian Institute of Millets Research as Senior Scientist (Biotechnology) during 2008. He was the recipient of a three year research project under the special grant, Rapid Grant for Young Investigators from the Department of Biotechnology, Government of India during 2010. His research areas of interest include bioinformatics, marker-assisted breeding and genomics. Current areas of research include the development of molecular markers through in silico analysis and application of genomics tools for understanding the molecular basis of grain yield heterosis and improvement of grain protein quality, iron and zinc content in sorghum. He has also organized a 21-day training on “Molecular Breeding Approaches for Genetic Enhancement of Millet Crops” as one of the course Co-Directors during 2014. He was awarded Junior Research Fellowship (JRF) by the Indian Council of Agricultural Research (ICAR), New Delhi, India for pursuing his Masters degree and Senior Research Fellowship (SRF) by the ASPEE Agricultural Research and Development Foundation, Mumbai, India for pursuing his Doctoral studies. He has guided one M.Sc. and one Ph.D. student. He is a Life Member in Indian Society of Plant Breeders, Coimbatore, India and Society of Millets Research, Hyderabad, India. He has published 15 research papers in various peer-reviewed International journals and 10 research papers in National journals.

He advocated several innovative and economical farming techniques such as planting methods, in-situ rainwater conservation in chickpea and post-rainy sorghum. Under his leadership a successful model on value chain on sorghum is established, which has brought reputation not only to IIMR but also to ICAR in commercializing value-added sorghum technologies and reviving sorghum economy. He has 165 peer reviewed foreign and national journal papers, 31 books & book chapters, and 90 other technical publications to his credit. He has guided as many as 16 Ph.D. and 16 M.Sc. students.